Introduction of rod licence in 1989 sparked protests from local fishermen 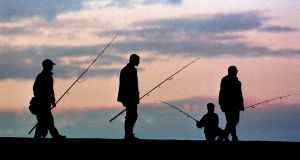 The rod licence for trout and coarse fishing was introduced in the Fisheries (Amendment) Act 1987 and led to a bitter split among anglers throughout the country. Photograph: Joe O’Shaughnessy/The Irish Times

The Department of the Marine told the government in 1989 that local gardaí were refusing to intervene when anglers were confronted with groups protesting against the introduction of the rod licence.

A memo to government listed recent incidents of intimidation allegedly carried out around Lough Corrib in Galway by groups of fishermen and professional gillies who were boycotting the lake because of the licence.

It complained that gardaí had stood back during these incidents. The memo stated that in one instance two anglers from Tuam were threatened at the lakeshore at Greenfields, near Headford, Co Galway.

“They were told they would be torn limb from limb” and “sent home in a coffin”, said the report from an official in the department.

“No assistance was offered by local gardaí, who said they were off duty. Assistance was provided from Galway Garda station.

“Active Garda assistance (not casual) is now required generally around the Corrib lakes to back up people going fishing to protect their property and to apprehend anyone involved in intimidation.

“The situation which prevailed last year where local gardaí appear to have opted out can no longer be tolerated.”

The memo also argued that all bodies in the State should show solidarity with the licence. It stated that Bord Fáilte (the then tourism board) should reverse its policy of not stocking and supplying rod licences.

“The present stance is perceived generally as being unsupportive of the government’s position,” it said.

The rod licence for trout and coarse fishing was introduced in the Fisheries (Amendment) Act 1987 and led to a bitter split among anglers throughout the country.

Some groups were fiercely opposed to the licence and boycotted fishing on their lakes. It affected many of the big lakes in the West and Midwest, particularly the Corrib, Loch Cong and Lough Ree in Co Westmeath.

Over a two-year campaign, there were complaints and allegations of intimidation and threats, which led to sharp divisions and hostility in towns such as Oughterard, Co Galway and Athlone, Co Westmeath.

Faced with continued negative publicity, then minister for the marine Brendan Daly finally backed down and withdrew the licence. It was replaced with a non-compulsory certificate system that was never implemented.

As the boycott entered its third year in 1989, the beleaguered department tried to impel local gardaí to prosecute protestors.

The government then instructed local gardaí to take a more proactive stance.

Large numbers of gardaí were deployed to supervise organised protests where the likelihood of a flashpoint was high. There followed numerous reports from gardaí concerning claims of intimidation, some of them quite small.

In May, on Lough Ree, local gardaí reported that German tourists who started fishing from their cruiser were approached by eight or nine boats with protesters and requested to stop fishing.

“An attempt was made to hand the Germans anti-rod licence literature but they refused it. The Germans left the scene,” said the report.

They had been circled in a menacing manner, verbally threatened, had their lines cut and one rod broken

It continued: “Three Swiss people were also approached and requested not to fish. They left the scene and informed their host about the incident.”

Another note from the Garda in Athlone noted that 60 protesters had travelled upriver to Lough Ree where they confronted members of Athlone Fishing Club who were fishing.

“At 11.30am, five men called to Athlone Garda station and reported there had been incidents on Lough Ree. They alleged they had been circled on in a menacing manner, verbally threatened, had their lines cut and one man had his rod broken.

“Subsequently six other reports of intimidation of a similar type by protesters were received by gardaí at Athlone.”

In another incident in Co Galway, a visiting medical doctor went to a pub in Clifden, where he was allegedly intimidated by three men from Cong, who began calling him a “scab” for breaking the boycott. He responded it was his right to fish and he would continue to do so.

1 ‘Summer is not lost ’ - Taoiseach announces accelerated easing of coronavirus restrictions
2 California police fatally shoot 22-year-old man on knees with hands up
3 Coronavirus: People to be allowed to travel anywhere in their county from Monday
4 Covid-19 restrictions: What you still can’t do this weekend
5 Donald Trump is in trouble, and that could spell very bad news
Real news has value SUBSCRIBE