State papers: British archives show ‘other side’ of diplomatic jousting on North 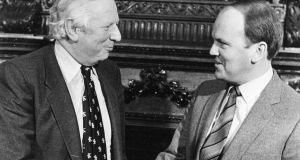 Presumably the Anglo-Irish desk at the Department of Foreign Affairs was a clearing house for gossip, insights and even some kites, leaks and scoops throughout 1989.

Unfortunately, the usual source of this material – being the reports from the various embassies throughout the world, and especially from London – have not this year been transferred to the National Archives of Ireland.

The reason is a lack of storage space. This is a great disservice to those awaiting these files under the 30-year closure rule.

And this is compounded by the fact that the “other side” of this story, being the British archives, covering the same diplomatic jousting, have been available for some years now as the British move incrementally from a 30-year rule to a 20-year delay before their public records are opened for research.

But all is not lost. Copies of the London embassy reports do invariably find their way into other files in the Department of Foreign Affairs and the Taoiseach’s department. So their work is by no means invisible, there being patchy traces of their efforts throughout the State papers which have been released for 1989.

Among them is an account of the trenchant views of a former Northern Ireland secretary Jim Prior. He, it may be remembered, had been banished in a cabinet reshuffle by Margaret Thatcher to Northern Ireland, in a bid to curb his influence as one of those heavyweight “wets” who opposed her economic neo-liberalism.

She characterised him as an example of a political type who had damaged the post-war Conservative Party – a type she called “the false squire”. They had all the “outward show of a John Bull – ruddy face, white hair, bluff manner” – but inwardly they were political calculators content to appease the left’s inevitable advance.

Prior had reluctantly taken the Northern Ireland job and it was to be his last cabinet posting. He had resigned in September 1984 but still retained his interest in Anglo-Irish relations and was not disinclined to meddle if it could help to curb what he saw as Thatcher’s insufferable – and counter-productive – political style.

Richard Ryan, who worked indefatigably during the 1980s, in Garret FitzGerald’s words “dining for Ireland”, had been Prior’s host in London and duly reported to Dublin that Prior was “very critical” of Thatcher’s Irish policy, and aside from his very good friends, Geoffrey Howe and Douglas Hurd, believed the rest of her cabinet “basically and fundamentally” were not interested in Ireland.

Prior also recorded his admiration of Haughey’s “quite uncharacteristic restraint” on issue after issue since he had returned to power in the 1987 general election. To have responded with Thatcher’s level of insensitivity “could not have had any positive effect and could only have made things worse”.

Although he considered it would be very difficult for Haughey and Thatcher to rebuild “a good, creative relationship”, he reckoned that, “unpleasant as the task may be”, Haughey alone could attempt it as she was herself “really beyond that”.

He was concerned at what he saw at Westminster as an erosion of support for the Anglo-Irish Agreement and noted a major shift of support for “direct anti-terrorist action”. This was an important clue to British thinking as 1989 was replete with rumours – and some admissions – of security force collusion with loyalist paramilitaries.

Prior reckoned that unionists were “seriously incapable of meaningful dialogue” and unable to “take or stand over important decisions”. Dublin and London had “to do their work for them and on behalf of the wider unionist community”.

Not all of the Department of Foreign Affairs’ “intelligence” on Northern Ireland was gleaned in London. Dermot Gallagher, who collated it all in the Anglo-Irish section in Iveagh House, noted the opinions of the Ulster Unionist MP Harold McCusker, who had expressed pessimism regarding serious political movement in the North.

This was because the British were not interested in bringing in a new cross-community initiative – in McCusker’s opinion “the correct decision” – because there was “no possibility of movement” as long as James Molyneux and Ian Paisley were leaders of the UUP and DUP respectively.

They were both “firmly opposed” to any serious cross-community initiative “and were ready to undermine and marginalise” anyone in their parties so inclined. The British were awaiting more conducive circumstances and if such were to arise, McCusker believed they would entice Molyneux with a peerage, “which, knowing Molyneux, he could not possibly resist”. Another factor discouraging the British, he believed, was “the unattractiveness” of the then UUP leaders-in-waiting John Taylor and Martin Smyth.

On the DUP’s Peter Robinson, McCusker reckoned he was “a much more friendly and sociable person than his public profile would suggest”. He was “not altogether happy” in the DUP due to a deteriorating relationship with Ian Paisley. He might even “join forces” with the UUP but only if he saw this chiming with “his own considerable political ambition”.

McCusker said Robinson, above all, was “desperately anxious for power” and would be willing to make “considerable concessions” in pursuit of it.

Another Richard Ryan lunch in January 1989 resulted in a report of the views of Howe’s political adviser, Anthony Teasdale. He would like to see a major Thatcher-Haughey summit – “a real meeting” – as he termed it, as he believed there was “a lot to be played for between them”.

Teasdale also expressed his belief that Peter Brooke, then chairman of the Conservative Party, would succeed Tom King as Northern Ireland Secretary.

This prediction was repeated in the London report from the Irish embassy of July 6th, which emphasised Brooke’s reputation as party chairman. The party’s Central Office had for years been seen as “a mess” which had never been remedied by successive chairmen, including Norman Tebbit. It was now generally granted that Brooke had “single-mindedly and with unexpected ruthlessness”, sorted it out, and was in line for a cabinet job and “could be right for Northern Ireland”.

Dublin was advised that Brooke coveted a cabinet post to prove his mettle, and, if chosen, would enjoy Thatcher’s backing. He would be straight and without “Irish axes to grind”.

Cricket alone could divert him from hard work as he was “badly affected by this English disease”.

Brooke was fond of saying there was no circumstance in politics which could not be covered by a cricketing metaphor. As he arrived into his new job, he must have thought he was going into bat on a difficult wicket; and he could expect some formidable bowling – not without the occasional bouncer or googly.

And that Brooke had a difficult beginning to his tenure as Northern Ireland secretary is manifest in the account given of a four-hour dinner in Iveagh House in October.

This was a meeting of the mandarins – the Irish and British public servants who had invested so much intellectual capital in re-aligning Anglo-Irish relations in recent years. Some of them might even have been forgiven if they felt a sense of proprietorship towards the new Anglo-Irish relationship and saw themselves as its custodians.

To this end, they had established a sequence of regular dinners – alternating between London and Dublin – at which frank speaking was encouraged. Held two or three times a year, any accounts of them could be patchy. But Noel Dorr – a veteran of these exchanges, first as Irish ambassador in London, now as departmental secretary – has left us a lengthy account of what he terms the “fairly animated discussion” of the group in Iveagh House in October 1989.

Dorr identified what he called a “single common theme” on the British side. They saw this as a “sensitive time psychologically” because of the convergence of a number of difficult issues: collusion by the security forces with terrorists; the “terrible shock” to British public opinion of the outcome of the Guildford Four case; and the IRA bombing at Deal in Kent.

Added to this was that Brooke had come to the Anglo-Irish Intergovernmental Council briefed “to give great weight” to developing good relations with the Irish; now he had had “three very difficult meetings”.

Even someone “as patient and politically intelligent” as Brooke must have his limits. The British characterised Brooke’s experience as being captured in “a mobile torture chamber where he is beset by a man with a grievance who does not seem to have been listening to what he has been saying”.

Consequently, Brooke can hardly see Anglo-Irish relations as “anything other than a punitive experience” and the British believed that there were now “some fences to mend including the relationship with Brooke”.

The Irish in response “argued vigorously” that the Anglo-Irish Agreement had to be more “than merely an arid bargain which both sides kept because of their commitment”. It was rather a common approach which both sides were committed to implement “with determination and imagination”.

A key aspect of this was confidence in the security forces and the Irish argued that the British should be “as concerned as we are” about negative aspects such as charges of collusion.

The British were adamant that the Irish should not link the Guildford case with the Birmingham and Maguire cases. In reply, the Irish insisted that it was indeed these 17 “lifers” who alone “had caught public imagination and sympathy”.

The British cabinet secretary Robin Butler insisted that any attempt to generalise what had come out of the Guildford cases to the other controversial cases “would be seen as the greatest insult”. He added that it would be “a profound and offensive mistake”.

Dorr managed to end his note with the observation that “the dinner discussions closed amicably” and all were agreed that a date the following February should be sought for the next one.

Dr John Bowman is a broadcaster and historian. His latest book is Ireland: The Autobiography (Penguin)