McGuinness referred to taoiseach ‘shaking hands with a loyalist gunman’ 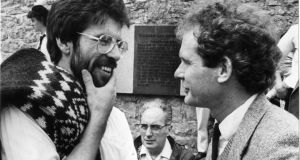 “For Sinn Féin, Dr FitzGerald’s visit could not have come at a worse time as it coincided with the launch of their election manifesto in Belfast. On top of this, the taoiseach’s unequivocal remarks about his government’s support for constitutional Nationalism guaranteed an angry response from Sinn Féin,” he wrote.

Mr McGuinness had “hit out at the visit by referring to press photographs of Dr FitzGerald shaking hands with an RUC officer”,the official wrote.

Mr McGuinness had said “the image of SDLP supporter Garret FitzGerald shaking hands with a loyalist gunman . . . should stick in the minds of Nationalists as they go to the polls on May 15th [for the North’s local government elections],” the official wrote.