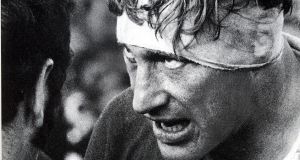 Willie John McBride was unrepentant about his decision to take part in the controversial World Rugby XV tour in apartheid South Africa in 1989. Photograph: Independent News And Media/Getty Images

The Irish Rugby Football Union’s decision to allow members to participate in the controversial World Rugby XV tour in apartheid South Africa in August 1989 was unjustified and brought about “needless public controversy”, the minister for foreign affairs Gerry Collins wrote.

After the tour, the IRFU said it regretted its decision to take part.

The tour was held to mark 100 years of rugby in South Africa and was roundly condemned by the Irish Anti-Apartheid Movement. It said it was in clear breach of the UN policy on the sport boycott of South Africa. Archbishop Desmond Tutu said the IRFU’s support for the tour when black children were being beaten, tear-gassed and detained without trial was “obscene”.

The Irish government had condemned the tour, with Collins saying it had sullied the name of Ireland, but at the height of the controversy on September 1st, the IRFU wrote to President Patrick Hillery inviting him to three international matches. An official in Collins’ department said the president should be advised to decline the invitations.

Before it was clear who would be participating in the tour, the Northern Ireland Office in London wrote to the Ulster branch of the IRFU, saying it discouraged rugby players and officials from taking part and asking it to let these views be known to the IRFU. “I would hope that the Ulster branch will discourage any of its Northern Ireland members from taking part in the proposed tour,” parliamentary undersecretary of state Brian Mawhinney wrote.

Criticism of the IRFU stance grew and Collins received several letters from the public congratulating him on his approach. Then, on September 15th, the IRFU backtracked and issued a statement saying it had considered all the circumstances “and on reflection regrets decisions taken at an earlier stage”.

‘Fully aware of the depth of feeling’

“The committee is now fully aware of the depth of feeling subsequently expressed by members of the rugby fraternity and others, and as a consequence re-affirms its earlier resolution that no Irish team at any level or any other team from Ireland shall be permitted to play in South Africa, nor will teams from that country be invited to play in Ireland whilst the remainder of the apartheid laws in South Africa exist,” the statement said.

Collins welcomed the news and said the decision to participate in the tour was “an unjustified decision which involved needless public controversy in both Ireland and South Africa”.

In an internal memo, a Department of Foreign Affairs official said the department would also like a clear indication that the IRFU would not travel to South Africa nor invite the South African Rugby Board to Ireland.

Its advice to President Hillery to decline the invitation to the three rugby matches had not been passed on by the time the IRFU had changed its position, so the Department of Foreign Affairs said Hillery should be advised to accept the invitations because the IRFU statement was “a significant acknowledgment on their part of past error”.

The State file on the case included an article written from South Africa which described McBride as “a burly Britisher”. It said he was very popular in South Africa ever since he had come to the country with the 1962 Lions team. An official had underlined the reference to ‘burly Britisher’ and placed an exclamation point beside it.

When the tour ended, McBride was unrepentant about his decision to take part. “I will maintain that rugby players should be allowed to play against whomever they please, without politics spoiling everything,” he said.

Moving Luke Kelly sculpture suggested as response to vandalism 16:00
Two men arrested for questioning about raid on bookmakers foiled by pensioner 15:43
Police officer ‘kicked in the face’ while clearing crowd from beach 15:30
Irish tourists excluded from visiting Greece as country begins its tourism season 15:07
Firefighters battle to keep forest fire away from an explosives factory 14:55

1 Irish tourists excluded from visiting Greece as country begins its tourism season
2 George Floyd death: Teenager dies in clashes as protests spread across US
3 Quarantine will cease within fortnight, Ryanair CEO claims
4 Police officer ‘kicked in the face’ while clearing crowd from beach
5 Taoiseach has confirmed schools will reopen at the end of August
Real news has value SUBSCRIBE