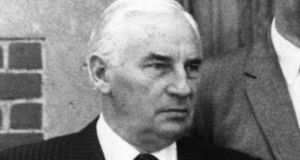 Minister for foreign affairs Peter Barry alleged that “members of the minority community had been left unprotected”. Photograph: Keystone/Getty Images

A decision by police in the North to allow an Orange parade to pass along the Garvaghy Road in Portadown on July 12th, 1986, brought Anglo-Irish relations “to their lowest point” that year.

The difficulties it posed for the Anglo-Irish Agreement are highlighted in files released in Belfast.

The initial RUC decision, communicated to Northern secretary Tom King, was that only a church parade on July 6th would be permitted to pass through the nationalist area of Portadown. However, the RUC finally decided, after negotiations with Orange and unionist leaders, to allow a July 12th march on the Catholic Garvaghy Road.

As a contemporary Irish Times report by Jim Cusack in the file noted: “The route agreed by the RUC [with the Orange leaders] had the Orange demonstration actually going in the direction opposite the intended rallying point in order that they might pass through a Catholic area.”

In a confidential report on the Portadown decision for the secretary of state on July 17th, 1986, JE McConnell of the Northern Ireland Office (NIO) felt the only winner had been DUP leader Ian Paisley “who gained the kudos for having led successful negotiations with the RUC” while upstaging local UUP politicians who “were trying to reach an acceptable compromise”.

The NIO official said Mr Barry’s statement and a riposte by Tom King, supporting the RUC, had “brought Anglo-Irish relations in general, and Barry-King relations in particular, to their lowest point” since the signing of the Anglo-Irish Agreement.

Garvaghy Road was one of the North’s most sensitive parade flashpoints for several years.

Burglar jailed for sexually assaulting woman who awoke with his hand on her throat 16:32
Convicted fraudster surrendered to UK authorities 16:27
Minister criticises ‘whiff of xenophobia’ to some TDs’ comments on quarantining 16:27
Woman jailed for assaulting a family friend who was trying to break up a fight 16:43
Judge sanctions €7,500 settlement for child over lip injury 15:45