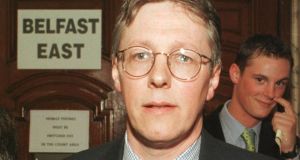 Peter Robinson sought “a hardening of the existing declaration to ensure that the men of violence and those who supported them would not be eligible to take their seats”.

Current First Minister of Northern Ireland Peter Robinson favoured banning Sinn Féin on the eve of the Anglo-Irish Agreement in 1985, according to Belfast files released today.

State papers released in London and Belfast this month relate to 1985 and 1986, whereas the Dublin papers are for 1984. Ireland releases papers after 30 years, but the UK is moving towards 20 years with releases twice a year until this is achieved.

According to the 1985 Belfast papers, Mr Robinson, who was then deputy leader of the DUP, expressed his views when a DUP delegation met Northern Ireland minister Richard Needham on October 16th. The Anglo-Irish Agreement was signed the following month.

The meeting opened with what an official called “the by now customary ‘round robin’ whereby each member of the delegation impressed upon the minister his abhorrence of the IRA murder campaign” and the support given to it by Sinn Féin councillors.

The official added: “Mr Robinson’s personal view was “in favour of a package with proscription [of Sinn Féin] paving the way for a further election and a hardening of the existing declaration to ensure that the men of violence and those who supported them would not be eligible to take their seats.”

Mr Robinson felt such a policy by the British government would gain the respect of the majority in Northern Ireland “regardless of their political hue”.

“Unless the government was seen to have the will to challenge the Sinn Féiners, all Unionist-dominated councils would be unworkable in perhaps two months’ time and the government would be forced to use Commissioners,” Mr Robinson warned, according to the note.