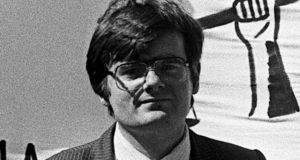 George Seawright: was reported as saying Catholics who objected to the singing of the British national anthem were “Fenian scum” who should be burned in an incinerator. Photograph: Pacemaker

The British government’s dilemma about dealing with Belfast loyalist politician George Seawright is highlighted in new files. Mr Seawright died from his injuries two weeks after being shot by the Irish People’s Liberation Organisation, a republican splinter group, in Belfast in November 1987.

He attracted particular notoriety in 1984 when he was reported as saying Catholics who objected to the singing of the British national anthem were “Fenian scum” who should be burned in an incinerator along with their priests.

His presence on unionist deputations posed a particular problem for the authorities at a time when the British government was loath to have normal contact with Sinn Féin due to its support for violence.

“The main point at issue was whether it was right to treat Mr Seawright in the same fashion as Sinn Féin,” ND Ward of the Northern Ireland Office wrote in a memo dated April 16th, 1985.

“He had advocated violence and, therefore, ministers had not wished to deal with him.

“Mr Seawright is a maverick and, some would say, a nutcase, but he is not a subversive in the Sinn Féin sense and to treat him on a par with Sinn Féin and refuse to see him as part of a delegation might only seem to enhance his standing in some quarters.”

Requests for him to lead a deputation to ministers should be rejected.