IRA bomb on Dublin-Belfast line could have been ‘disastrous’ 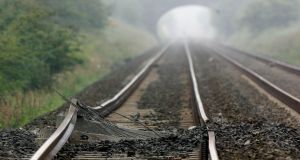 A large crater caused by a bomb destroyed part of the main Belfast to Dublin railway line close to Newry on June 30, 2000. The bomb was thought to have been the work of the dissident republican terrorist group the Real IRA. Photograph: AP Photo/Peter Morrison

An IRA bomb that exploded on the tracks of the Dublin to Belfast railway could have had “disastrous” consequences if a different train had been in service at the time, newly-declassified files disclose.

Diplomatic cables released under the 30-year-rule show casualties were avoided when the explosive went off at Lurgan on July 31st, 1989, as a Northern Ireland Railways (NIR) train was delayed at another station.

In the cables, Irish diplomats in Belfast reported back to Dublin that the “British side” told them an anonymous 30-minute telephone warning was made to the Samaritans at 10.10pm that night.

A search operation was launched and the bomb was located on the southbound track at Lurgan station at 10.38pm. The line was cleared before the bomb exploded at 10.57pm.

“The Dublin to Belfast train, which was an NIR express, was travelling approximately 35 minutes behind schedule and was stopped at Portadown,” according to the cables. “The British side say, however, that if the train had been a CIÉ [Irish Rail]-owned locomotive and had been travelling on time, a potentially disastrous situation would have arisen.

“The train would have been due in Lurgan at 10.10pm, the precise time at which the warning was received.

“But even if there had been a few minutes in hand, it could not have been possible, because of the absence of radio contact with CIÉ trains, to relay a warning to the train and stop it. The bomb had been placed directly on the track and the train itself would have detonated it.”

The lack of communications with Irish Rail trains had been raised at the Anglo-Irish Intergovernmental Conference at Maryfield in Belfast in April that year.

Irish Rail trains were equipped with UHF frequency radios “and contact from the centralised train control is lost north of Tandragee [Co Armagh] which is six miles south of Portadown”, the cables note.

NIR trains had a dual UHF and VHF radio system, allowing control in Belfast to contact them “anywhere” on the line.

“The potentially disastrous situation that could have arisen last evening adds considerable urgency to solving this problem and the British side have asked us here about progress in the matter,” a diplomat reported. “Given the frequency with which bombs are now being placed on the line, the issue is obviously one which merits immediate action on the part of CIÉ.”

In a separate cable, dated March 2nd, 1989, and marked confidential, an Irish diplomat reported to Dublin that a bomb placed on the third archway of Craigmore Viaduct, between Newry and Bessbrook, had created a 10-metre crater, destroying at least one line.

There had been no warning given and the bomb had exploded a mere four minutes before a passenger train was due to pass the point. The passenger train could have “plunged off the viaduct”, it notes.

Also in March that year, then minister for foreign affairs Brian Lenihan made a statement condemning the IRA campaign against the railway, noting it had shut down the line for 40 days over a three-month period.

The bombing campaign prompted the US to issue an advisory warning to its citizens about the railway being targeted.

Cables in August that year show Dublin and London were annoyed about the advisory, and appealed to the US not to publicise it. An Irish diplomat in Washington reported back that the US “recognises the validity of the minister’s concerns, however, they believe an announcement to travellers is necessary and in this context refer to the Pan Am 103 incident” at Lockerbie.

“The US have taken into account the concerns about affording a propaganda victory to terrorists,” the diplomat adds.

In April 1989, diplomat Declan O’Donovan reported to Dublin that John Fee of the SDLP told him the speculation was that the railway bombing campaign was connected to road haulage.

‘Opportunities for the IRA’

There was a belief that the establishment of the European Union in 1992 would “cut IRA revenue from smuggling, increase haulage traffic and provide opportunities for the IRA through the lapse of official [customs] controls.”

“It is not thought hauliers are paying the IRA to close the line but rather that the IRA itself, or a section of it, is determined to get control of the increasing North/South haulage business before 1992,” O’Donovan reported. “By control, Fee meant direct or indirect commercial control of some companies as well as the extortion or protection money from others.”

Three days later, O’Donovan reported that he spoke with the SDLP MP Seamus Mallon who was “strongly sceptical” about the theory, arguing that the main suppliers using the railway – Irish Cement and Guinness – would not be vulnerable to IRA influence and would transport by sea if necessary.

The railway bombing campaign is “symbolic” and about showing the IRA’s ability to operate effectively despite observation towers and increased military presence in the area, Mallon believed.