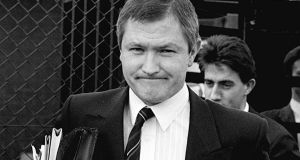 Charles Haughey’s government raised substantial concerns with its British counterpart in the weeks before the murder of Belfast solicitor Pat Finucane in 1989 that members of the RUC were encouraging loyalist paramilitaries to target certain Northern Irish lawyers.

Finucane, a high-profile lawyer who had acted for defendants accused of terrorist offences in Northern Ireland, was shot dead in his home by loyalist paramilitaries on February 12th, 1989. His wife Geraldine was also injured in the attack.

The murder caused a furore at the time and a serious rift in Anglo-Irish relations.

Less than a month before the murder, Home Office minister Douglas Hogg had claimed in the House of Commons there were several solicitors who were “unduly sympathetic to the cause of the IRA”.

Government records from the time, newly released by the National Archive under the 30-year rule, show that senior Irish officials had raised serious concerns about Hogg’s remarks – which were never retracted – and about widespread rumours in nationalist areas that a number of named solicitors might be targeted by loyalist gunmen.

The records also disclose the large and immediate scale of the response by Haughey and his government to Finucane’s killing.

On the morning following the murder, the taoiseach instructed the Irish ambassador to the United Kingdom, Andrew O’Rourke, as well as the most senior diplomat based in the Irish secretariat in Belfast, Seán Ó hUigínn, to convey his grave concerns about the killing to British prime minister Margaret Thatcher and Northern Secretary Tom King.

The government pointed to the statements made by Hogg as well as the rumours about targeting. “The murder of Mr Finucane has shown that these concerns were justified,” said the briefing.

Haughey urged an early statement from the British government making it clear that any attack on any member of the legal profession in the North because of professional actions was an attack on the system of justice.

Haughey also said that the “greatest care [had] to be given to any statements which might have tragic consequences”. The taoiseach ignored British objections to that sentence when making a public statement later that day. In the event, Hogg never withdrew or retracted his controversial remark, though a statement attributed to him described Finucane’s murder as “wicked”.

Senior Irish officials had since the previous August raised concerns that high-profile solicitors who appeared for republican paramilitaries were being targeted. They were concerned in particular for Paddy McGrory, a leading solicitor who had represented, amongst others, the families of the three IRA members killed in Gibraltar the previous year. Finucane and Oliver Kelly were also named.

In a meeting of an Anglo-Irish conference only four days before Finucane’s murder, tánaiste Brian Lenihan was briefed to repeat his concern about Hogg’s remarks in Westminster the previous month.

The brief stated that it was “all the more unfortunate because of rumours circulating that Paddy McGrory and certain other solicitors may be targeted by loyalist paramilitaries.

“We could repeat (very privately) our view that Mr Paddy McGrory is certainly not a solicitor we would regard as being ‘unduly sympathetic towards the IRA’. We see his relationship with IRA clients as entirely professional.”

In a confidential dispatch from Belfast the day after the murder, Ó hUigínn reported on his meeting with British officials and the issues he had raised that morning.

He wrote: “Rumours [had] circulated in the nationalist community for some weeks previously that loyalist suspects had been encouraged to take action against certain named solicitors – Mr Finucane, Mr McGrory and Mr Kelly – in the course of interrogation by the RUC at Castlereagh Barracks.

“I recalled that we had indicated at the meeting on 3rd February that the question was of sufficient concern that Ministers might want to raise it at the conference.”

At his meeting with Ambassador O’Rourke in London, Sir Robin Butler, the most senior civil servant in Britain, rejected any link between Hogg’s statement and the murder.

O’Rourke reported: “Butler thought it would appear that we were suggesting that Hogg bore some responsibility for Mr Finucane’s death and he regretted this.”

In a conversation with a Belfast Telegraph reporter several weeks before the murder, Hogg said he had made the statement “on advice” (presumably from the British security services). He also said he had contemplated naming names (which had been provided to him) but had decided not to do so.

A confidential dispatch from the Irish embassy in London disclosed that former SDLP leader Gerry Fitt, then Lord Fitt, was minded to name names under privilege in the House of Lords in January but had been dissuaded.

Hogg’s claim in January was immediately challenged by Seamus Mallon of the SDLP at that session in Westminster. Mallon said: “I have no doubt that there are lawyers walking the streets or driving on the roads of the North of Ireland who have become targets for assassins’ bullets as a result of the statement that has been made tonight.”

Peter Murtagh, then a journalist with the Guardian in London, told an Irish diplomat later that year that one of his Guardian colleagues had “swallowed” an unsubstantiated line fed to him by the RUC that Northern Ireland lawyers paid a portion of their fees to paramilitaries. He said the paper had printed what amounted to a retraction.

Another diplomat met McGrory in March 1989. The solicitor said he was “very grateful to [Mr Haughey] for his personal interest in his welfare after the Finucane murder. He expressed himself as very satisfied with the actions taken by the RUC in respect to his security.”

However, the memo stated the RUC regarded an ongoing threat to his life and that against two other solicitors – Kelly and Paschal O’Hare – as a “very real one”.

McGrory showed the diplomat a message received from the Ulster Freedom Fighters (a nom du guerre for the UDA) using a code “Star of David Ulidia”.

“While the RUC say the code is slightly out of date, they felt this does not materially reduce the level of threat in this case.

“Dessie Boal QC [a prominent criminal barrister] has advised him the only way to eliminate a threat of this kind is through contact with those making the threat and Boal is making discreet inquiries in this regard.

“McGrory is is very reluctant to go down that avenue,” it stated.