British state papers: UK government alarmed at republicans’ use of internet for propaganda 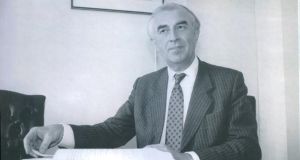 The British government was alarmed at the increasingly successful use of the internet for propaganda purposes by republicans, confidential files released today show.

The possible threat to British national security from a sophisticated Sinn Féin website was raised by minister of state at the Home Office David Maclean in a letter to Sir John Wheeler, the Northern Ireland Office minister, on March 12th, 1996.

“Amongst the unsavoury nasties were these very professionally produced pages, apparently showing our complete [military] deployment in NI,” Maclean wrote.

He enclosed documents from the website which gave details of British military, Royal Navy, RAF and Royal Irish Regiment numbers.

“It horrifies me to find such dangerous and nasty propaganda on the internet,” wrote Maclean. “When we add the other crimes and child pornography that the police have to deal with, the time for some control is fast approaching.”

In his reply, Wheeler expressed his “horror” and said he had tasked his officials to explore the issue.