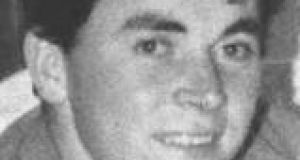 Fergal Caraher (20) was killed when British soldiers opened fire at a checkpoint in Cullyhanna, Co Armagh, on December 30th, 1990.

The impact of the shooting dead by British troops of an IRA volunteer in 1990 on relations between the nationalist community and the security forces is highlighted in previously confidential files.

The killing of Fergal Caraher (20) and the wounding of his brother when British soldiers opened fire at a checkpoint in Cullyhanna, Co Armagh, on December 30th, 1990, was raised at a meeting of the Committee of the Security Forces and the Community in March 1991.

The chairman, Peter Bell of the Northern Ireland Office, reported it was apparent “from anecdotal evidence” from civil representatives on the ground that the behaviour of some soldiers following the shooting “left something to be desired”.

The unanimous view at the meeting was that relationships between the security forces and the local community had never been good and the shooting had merely brought matters to a head.

The meeting heard Sinn Féin continued to make political capital out of the shooting and its aftermath, including embarrassing Seamus Mallon, the SDLP MP for Newry and Armagh.