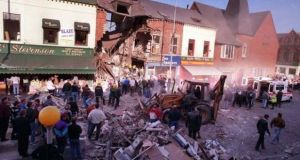 Cardinal Cahal Daly believed Gerry Adams had been “horrified’ by the Shankill bombing that killed 10 people.

This is revealed in a previously confidential account of a meeting between the cardinal and Minister of State for Northern Ireland Robert Atkins on November 16th, 1993.

The bomb exploded prematurely in Frizzell’s Fish Shop as it was being planted by two IRA men below the UDA’s Shankill headquarters on October 23rd, 1993. Ten people, including one of the bombers, were killed.

Daly told the minister the bombing had “shocked and horrified Gerry Adams”.

He said Adams had not been aware the attack was being planned as “each brigade has its own autonomy”.

The cardinal’s intelligence suggested that this had been “a revenge vendetta by the Ardoyne brigade”, the account says.

The cardinal also praised John Hume’s recent attempts to find a peaceful solution but advised that at no time had he entered into dialogue with the SDLP leader, preferring to distance himself.