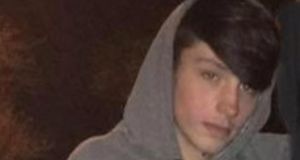 Michael Cornacchia died from ingesting ecstasy and U-47700. Photograph: Provision

A judge has expressed concern over a teenager’s lack of insight into his drug dealing after hearing the young man didn’t believe he should get a prison sentence for possessing a psychoactive drug which later claimed the life of another teenager.

Judge Gerard O’Brien said he was very concerned about the lack of insight shown by the 17-year-old boy into the consequences of possessing the psychoactive drug U-47700 (also known as U4) which later killed 16-year-old Michael Cornacchia in Cork city.

“I am very concerned that your client spoke to the probation officer and felt the sale of this particular drug didn’t merit a prison sentence,” Judge O’Brien told counsel Jim O’Mahony SC for the 17-year-old who cannot be named because he is a juvenile.

The teenager had earlier pleaded guilty to possessing the synthetic opioid for sale or supply. He was charged with the offence by gardaí following an investigation into the death of Michael Cornacchia, who was found unconscious by his mother at their home at Deermount in Deerpark on Cork’s southside on January 16th, 2017 and was pronounced dead at the scene.

A post mortem examination revealed he died from ingesting ecstasy and U-47700 in what was the first known case of someone in Ireland dying from the synthetic opioid. The drug was responsible for dozens of deaths in the United States in 2016.

At the earlier hearing at Cork Circuit Criminal Court, Mr O’Mahony said that he did want to cause upset to the family of Mr Cornacchia but he said he did not accept that the offence to which his client had pleaded guilty was the direct cause of Mr Cornacchia’s death.

But Judge O’Brien said the accused had pleaded guilty to an offence of possessing the drug for sale or supply, knowing or being reckless to whether it was acquired for human consumption. “The consequence that flowed from the sale of this drug was the death of a 16-year-old boy,” he said.

On Monday, in Cork Circuit Court, Judge O’Brien noted that the teenager was doing well in Oberstown, where he has been detained since September, but he was concerned about a probation service report which said he lacked maturity and an insight into the consequences of his drug dealing.

Mr O’Mahony said the youth had shown “genuine remorse” after coming before the court because of “the tragic death of this poor unfortunate child” and he had begun maturing since entering into Oberstown and the staff there believed that he was “a model” detainee.

But Judge O’Brien re-iterated his concern: “The difficulty is that the slippery slope that he is on is not a slope – it’s a slide it has been so fast and he has catapulted himself before the Circuit Court in just a matter of months.”

The judge was told the youth is currently serving another sentence for an unrelated matter until February 3rd, 2018 and he remanded him on bail on the drugs charge until February 1st to see if he gains any further insight into his offending and whether he remains at risk of re-offending.