New entrant teachers to lose €300,000 over career due to pay cuts, conference hears 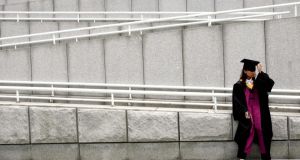 Young teachers have been hit by lower pay rates introduced in 2011 and the scrapping of allowances for qualifications in 2012. Photograph: Jason Lee/Reuters

Recently-recruited teachers would have to work until they were 94 to receive more money from a new revised pension system than they actually paid into the scheme, the TUI annual conference has been told.

Delegate Martin Marjoram of the union’s executive committee said young teachers who entered the profession in recent years had faced a “perfect storm” in terms of pay cuts, higher costs of qualifications and an inferior pension scheme.

Under changes introduced, the pension of recently recruited teachers, as well as other public servants, will be based on careeer average earnings rather than their final salary.

Earlier TUI general secretary John MacGabhann told the conference new entrant teachers will lose about €300,000 over their careers as a result of lower pay levels put in place by the Government for those who came into the profession in recent years. He contended young teachers were being treated as “galley slaves”.

Mr Marjoram said a report into the new career average pension scheme had found one recent entrant into the profession would have to live until they were 94 to get more money out of the scheme than had been contributed.

“That is a remarkable figure and if a pension scheme like this was ever to be introduced in the private sector, the Government in all likelihood would itself declare it to be illegal . . .

“It actually means that this is not so much a pension scheme but rather a profit-making scheme for the Government. It is a way of extracting money from people who have no choice but to contribute even though it is not going to return them the money put into it.”

Mr MacGabhann told delegates the issue of impoverishing teachers was “inevitably connected to the quality of service to students”.

“Teachers who are subject to very high standards in terms of professional performance cannot afford rents, are being forced – by poverty – to give up part-time jobs, to emigrate, to moonlight. They cannot plan, have no creditworthiness, have their personal independence compromised.

“Why? Because [the] government marked them out for especially punitive treatment and because employers – who have selected them at interview – treat them as galley slaves.” He said it would cost money to fix this problem and it would cost more if there were further delays.

Mr MacGabhann said the TUI would seek fair and sustainable resolution of issues affecting its members. Members of the TUI rejected the new Lansdowne Road agreement on public service pay while the former Haddington Road accord, with the various protections it provides, expires in June.

The Government has put in place emergency legislation with serious consequences for groups who stay out of collective agreements.

Mr MacGabhann said members would be given an opportunity in May to determine “what happens next”.

The TUI conference passed a motion setting out any further attempts by the Government to impose unilateral changes to pay and conditions would be vigorously opposed.