‘You are my hero,’ says son of Caitríona Lucas at funeral mass 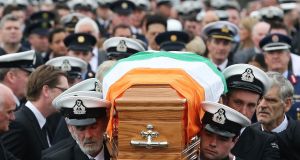 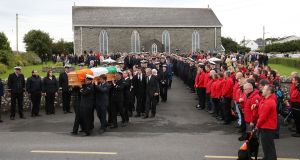 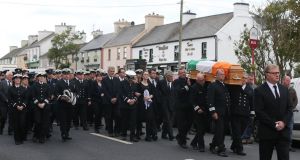 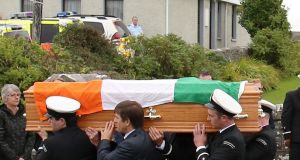 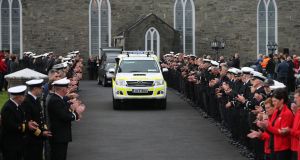 The son of fallen coastguard volunteer, Caitríona Lucas wept today as he said goodbye to his mother, saying “you are my hero”.

At a packed Liscannor Church, 20-year-old Ben Lucas told mourners that his mother was “an exceptional person in every way. She loved life and gave everything she did 100 per cent”.

Speaking on behalf of the Lucas family, Ben said: “My mother had lots of great qualities, she was caring, honest, kind and of above dedicated. She was an inspiration to everyone around her and I will always miss her smile and her laugh.”

In a Gospel reading, Ms Lucas’s daughter, Emma, said “there is no greater love than to lay down one’s life for one’s friends”.

Wearing his Irish Coastguard uniform, Ms Lucas’s husband and member of the Doolin Coastguard Unit, Bernard, read from a poem dedicated to the deceased from a friend.

He said Ms Lucas never once missed the call and she was “aware that others matter more, Caitríona, we are so proud”.

“We are proud as we often said that we shared this land and sea with you our hero, strong and brave, we salute your immensity.

“We are very sad that you are gone and we think we understand — parting with you as you always lived with that outstretched helping hand. Your beauty shines so true and your sacrifice will not be lost on us — your loyal crew.

“So anchors away, our beauty Queen — you are in our hearts and souls, from your friends and lonesome crew, it is now ‘slán go fóill.”

Before reading the poem, Bernard told mourners “don’t put things off. Do them now, life is short, life is very precious.”

Later, hundreds of Coastguard volunteers in uniform walked behind Ms Lucas’s coffin draped in the Irish coastguard colours to bring her remains to her final resting place at Kilmacreehy cemetery overlooking Lahinch bay.

Earlier in his homily, parish priest Fr Denis Crosby said “the thousands of people who went through last night were able to convey something that words can’t do — respect and thanks”.

Fr Crosby said: “They come to represent the whole country. Flags are flying at half mast at all official buildings in the country today and why not? To salute a great spirit, a spirit of service and graciousness, a wonderful woman.

“Caitríona Lucas lived as if she was the light. She carried the light wonderfully into our world. She was a light in our world that is very often dark and careless.”

He said Ms Lucas didn’t give her life just to die but that “she gave her life all her life and she knew that living was giving”.

“As long as there was need, she was there. She was first always to answer the call.”

“They shared journeys and they travelled a lot and the greatest achievement that they together was that they brought into the world two wonderful children.

“Teamwork was her theme. She couldn’t have made what she was without you,” said Fr Crosby.

He said:“As Bernard said she loved the ‘lads’, meaning those two, Ben and Emma.”

“She gave unbelievably,” he said, referring to Ms Lucas’s work in the library. “She set up for the youngsters the lego club. She brought in her own lego and lego played with as old kids. The uptake so successful because they had to limit the numbers that would come.”