Heavy snowfall was seen in the southwest, west and north on Monday night 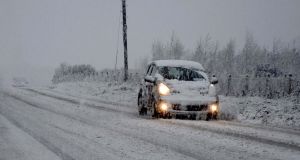 A car drives along a snow covered road near Knock in Co Mayo. Photograph: Paul Mealey

A status yellow snow and ice warning has been lifted for the entire country following a night of snowfall in the southwest, west and north.

Despite lifting the warning, Met Éireann has warned of “hazardous conditions” due to compacted snow and ice.

The yellow weather warning was issued on Monday and was in place until 11.30am on Tuesday. AA Roadwatch said icy road conditions have been reported in many areas this morning, particularly in parts of the west and north of the country.

There are slippery road conditions around the Mayo/Roscommon county bounds, according to AA Roadwatch, including the Claremorris and Castlerea areas. Elsewhere in Mayo, there is snow on some roads around Castlebar. Conor Pass in Co Kerry is closed until further notice due to treacherous conditions.

Met Éireann said conditions will be cold and frosty on Tuesday morning with ice and lying snow in places. There will be a mix of sunshine and scattered wintry showers later in the day, with the showers frequent over the western half of the country, where there is also a risk of hail and thunder.

Highest temperatures will be between four and seven degrees in fresh and gusty westerly winds.

Scattered showers will continue on Tuesday night with lowest temperatures of between zero and two degrees overnight.

Conditions are due to turn milder from Wednesday with day time highs of between eight and 10 degrees. There will be scattered showers, turning into longer spells of rain at times in the north and northwest. Showers will become isolated elsewhere, with bright and sunny spells developing.

It will be mainly cloudy with isolated showers on Wednesday night, with lowest temperatures between four and six degrees, in light to moderate south to southwest breezes.

Thursday will be mostly cloudy with patchy outbreaks of rain, although some of south and southeast will stay dry. Highest temperatures will be between 10 to 12 degrees. Rain in the west will spread countrywide overnight and it will be breezy in fresh and gusty southwest winds. Temperatures will drop to between six and eight degrees overnight.

1 Co Clare houses surrounded by water evacuated as rainfall warning issued for most counties
2 Coronavirus: Global concern grows with sharp rise in infections outside China
3 Portraying Sinn Féin as a dangerous party is a political strategy
4 The Boris bridge: Will Johnson’s ‘vanity project’ ever happen?
5 ‘The IRA has gone and they are not coming back. That’s the reality’
Real news has value SUBSCRIBE