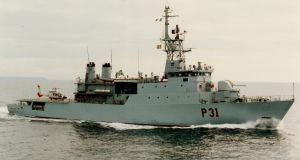 Irish Navy’s LÉ Eithne: plays key role in monitoring maritime smugglers who travel around the north of Ireland to mainland Europe in an effort to avoid detection.

The mothballing of almost one-quarter of the Naval Service’s ships will have a significant effect on the State’s ability to stop drug smuggling through Irish waters, security sources say.

A week ago, the head of the Navy, Cmdr Michael Malone, announced the flagship LÉ Eithne and patrol vessel LÉ Orla were being brought into port as the service “cuts its cloth” due to severe manpower shortages.

The LÉ Róisín will be out of service for some months while it is being refitted. Planning documents state the LÉ Eithne and LÉ Orla will likely remain in port for between 15 and 18 months while personnel are recruited and trained to man them. However, informed military sources said the prevailing belief among Naval Service senior staff was the vessels LÉ Eithne and LÉ Orla would never sail again.

“The staffing problems are getting worse, not better, and there is absolutely nothing to suggest that is going to change,” an officer said.

Cmdr Malone’s decision is seen as prudent by most Naval officers due to the lack of staff needed to safely crew the two ships. But there is widespread anger with the Government that the staffing levels have deteriorated to this point.

Both vessels have played a key role in operations to target drug smuggling into Ireland and other countries, particularly as part of the Maritime Analysis and Operations Centre (Maoc), an EU-funded international anti-drugs agency.

Naval Service ships have assisted or led several high-value, anti-smuggling missions in recent years, including the interdiction by UK authorities of a boat carrying 500kg of cocaine in 2018.

In 2008, the LÉ Orla assisted in Operation Seabight, which resulted in the largest drugs seizure in Irish history. About €750 million worth of cocaine was recovered off the coast of Co Cork.

Naval plans state the current patrols of the service’s remaining six vessels will not be altered, meaning the withdrawal of the LÉ Eithne and LÉ Orla and the refit of the LÉ Róisín will leave a large gap in coverage of Ireland’s coasts.

“This is like a neon sign for drug smugglers. The deterrent factor is gone. Everyone will think ‘Paddy is easy, let’s land them on the coast of Kerry’,” a military source said.

Guns and drugs “The end result is there will be more drugs on the streets of Dublin, Portarlington, Ballina etc. And more guns, since the guns come in with the drugs.”

Intelligence suggests maritime smugglers are increasingly travelling around the north of Ireland on their way to mainland Europe in an effort to avoid detection. The LÉ Eithne, which has the longest range of any Naval Service vessel at 13,000km plays a key role in monitoring such vessels.

“Ireland has a massive sea mass. Nine vessels is like having two Garda cars patrol the entire island. Now it’s like having 1½,” an officer said.

The mothballing of the LÉ Eithne would also have implications for the service’s search-and-rescue capabilities, sources said. It is the only ship capable of refuelling helicopters at sea which effectively doubles the range of the Coast Guard’s Sikorsky helicopters.

The ship’s helipad has not been used for many years but helicopters are able to winch a fuel hose up to them while hovering above.