Temperatures were 2.2 degrees above average for the season, Met Éireann says 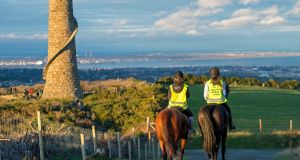 Two young riders on their horses past the Lead Mines chimney at Barnaslingan wood, Co. Dublin on Sunday. Last winter was the warmest on record in Ireland. Photograph: Dave Meehan for The Irish Times

Last winter was the warmest in Ireland since records began 119 years ago, Met Éireann has revealed.

The months of December 2018 and January and February last year were 2.2 degrees above the seasonal average.

The extraordinary mildness of last winter was evidenced by the presence of painted lady butterflies on New Year’s Day in Co Cork – they are supposed to be a species only ever seen in Ireland in summer time.

In the same month, Irish Times readers sent us photographs of roses in bloom and cherry trees blossoming.

There were reports too online of people cutting their grass and birds building nests three months earlier than normal.

February last year was the second warmest since records began in 1900. The highest temperature ever recorded in Ireland during the month was recorded at Valentia Observatory in Co Kerry where the thermometer hit 17.2 degrees on February 26th.

The meteorological seasons of winter, spring (March, April and May) and summer (June, July and August) were all at least 0.9 degrees above their long-term average which is the average temperature for the years 1961 to 1990.

Autumn was the only season where temperatures were normal for the time of year. Even then September was warmer than average, but October and November were slightly cooler.

Last year was the ninth in a row where temperatures were above average, a phenomenon Met Éireann climatologist Aidan Murphy said was directly attributable to global warming.

The average temperature in Ireland in 2019 was 10.5 degrees which was 0.9 degrees above the long term average.

Rising temperatures in Ireland are being reflected globally. When fully analysed, 2019 is expected to be the second or third warmest year on record.

Average temperatures for the five-year (2015-2019) and 10-year (2010-2019) periods are almost certain to be the highest on record. Since the 1980s each decade has been warmer than the previous one and the trend is expected to continue.

The research group Berkeley Earth stated that last year was likely the second hottest year ever recorded globally, surpassed only by 2016. Last year’s average temperature is likely to be 1.1 degrees higher than the pre-industrial period.