William Trevor, award-winning writer, dies at the age of 88 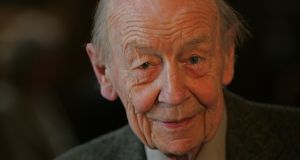 Cork-born writer William Trevor has died at the age of 88, it has been announced.

His publisher Penguin Random House UK said he passed away on Sunday night.

The novelist was born as William Trevor Cox in Mitchelstown, in 1928, and educated at St. Columba’s College in Dublin and Trinity College Dublin.

He later married Jane Ryan, whom he had met at university, and to whom he dedicated many of his books. They moved to England where Trevor set himself up as a sculptor ‘rather like Jude the Obscure without the talent’ as he once described himself.

The first of his two sons was born in London where Trevor got a job as copywriter and it was only when he took a full-time job at a London advertising agency that he really began writing, his publisher said in a statement.

His first novel, A Standard of Behaviour, which he subsequently disowned and refused to have republished, was published in 1958.

In later years he chose to describe The Old Boys, which was published in 1964 and went on to win the Hawthornden Prize for Literature, as his first novel.

“In its comedic portrayal of unseemly, sometimes desperate behaviour hidden beneath a thin veil of decorum, it prefigured the theme of most of his early and middle-period novels, many of them set in a rundown, post-War London,” the publisher said.

“Later he turned his attention to his native Ireland, and in particular the tensions between the fading Anglo-Irish gentry and their Catholic neighbours. These were more complex books, exploring ideas of loyalty and betrayal, loss and belonging, often through multiple viewpoints, but always with a deeply felt compassion for all his characters.”

Trevor went on to write over fifteen novels. He won the Whitbread Prize three times and was shortlisted for the Booker Prize four times, most recently with The Story of Lucy Gault in 2002.

It was a favourite to win, but lost out to The Life of Pi.

Penguin Random House UK said Trevor’s novels were widely admired but it was perhaps on his short stories that his literary reputation would come to rest.

“For many years a contributor of stories to the New Yorker, he had a firm belief that the short story was as great an art form as the novel, and as difficult to write.

“His Collected Stories, published by Viking in two volumes in 2009, runs to almost 2000 pages, and the best of them, including The Ballroom of Romance, Kathleen’s Field and Cheating at Canasta, are among the greatest stories of the last half-century, drawing comparison with the earlier masters of the form, Chekhov, Maupassant and Joyce.”

Described as “a modest and private man”, Trevor disliked talking about his books and abhorred any personal publicity, believing that the work should stand for itself.

“He lived for many years in a secluded house in Devon, visiting Ireland frequently, taking walking holidays in Italy, and pursuing his passions of gardening and watching sport – especially rugby, cricket and tennis. But it was writing that truly absorbed him.”

In September 2015, in a ceremony presided over by the President of Ireland, Michael D. Higgins, Trevor was elected Saoi of Aosdána, an honour also bestowed on writers such as Samuel Beckett and Seamus Heaney.

Mr Higgins then paid tribute to Trevor as “a writer of world renown, of great distinction, of towering achievements, of elegance and grace”.

He is survived by his wife Jane and their two sons, Patrick and Dominic.