Why is Hurricane Ophelia so powerful and why is it heading for Ireland? 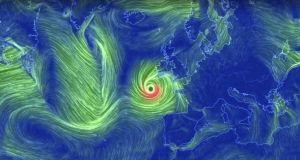 Hurricane Ophelia has already reached winds of 185km/h but by the time it hits Ireland these gusts will have weakened to 130km/h.

Only 15 hurricanes have passed within 200 nautical miles of the Azores since scientific monitoring began in 1851.

“This one [Hurricane Ophelia] is very unusual in that it has come just slightly westwards but it has taken a direct tack northwards,” Met Éireann forecaster Evelyn Cusack said.

Making its way from the Azores in the Atlantic Ocean, the (previously) category three storm is the most powerful hurricane this far east of the United States on record. Parts of Ireland and the UK are due to experience the tail end of the hurricane on Monday.

Met Éireann meteorologist Deirdre Lowe said the hurricane was unusual “in that it has developed so far east”.

“It has a lot of moisture with air sucked into it and that’s why we have very warm air up over Ireland at the moment,” she said.

“Why it has developed so far east is probably due to a combination of reasons to do with the gulf stream, the jet stream. I can’t pinpoint one particular reason at the moment.”

Ms Lowe said the eye of the storm was “disappearing” as it made its way northwards towards Ireland.

“It’s changing now into an ex-tropical cyclone. It’ll be a post-tropical cyclone by the time it reaches Ireland about midday [Monday]. It’s expected to hit the southwest of Ireland and then track north and northeastwards over the country tomorrow afternoon.”

Hurricane Ophelia has already reached winds of 185km/h but by the time it hits Ireland these gusts will have weakened to 130km/h. This is still powerful enough to cause structural damage.

Prof John Sweeney of Maynooth University said: “I think it’s unheard of for a hurricane to form this far east in the Atlantic and then take an almost south-to-north track which takes it directly across Ireland”. “Once the storm passes along the west coast [of Ireland] the winds will then be becoming much more northwesterly and westerly and they will be equally ferocious for a time,” he told the This Week programme on RTÉ radio.

“We should not be lulled into a false sense of security by thinking that the whole thing is over. We really need to watch for the whole day [Monday] until events have passed well to the north of Ireland.”

“This is the 10th consecutive tropical storm that has turned into a hurricane. The last time that this was observed was 1893. It is pretty unprecedented.”