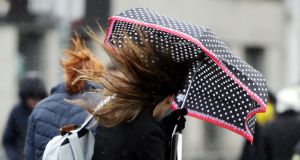 Three weather warnings – for wind, gales and rough sea conditions – have been issued by Met Éireann for Wednesday night and Thursday, heralding the end of a sunny spell across much of the island.

The weather forecaster has issued a status yellow wind warning for counties Clare, Cork and Kerry, a status orange marine warning for gales , and a marine small craft warning.

Conditions will turn for the worse overnight on Wednesday night as winds build in parts of Munster, which will continue through Thursday morning. Southerly winds veering west to northwest will reach average speeds of 55 to 65km/h at times in the areas affected by the status yellow warning, with gusts of 90 to 110km/h.

The highest of the wind speeds are expected in coastal areas and on exposed hills and mountains, where winds may even exceed the expectations, according to Met Éireann.

The yellow wind warning is Met Éireann’s mildest weather warning. However, there is a strong danger of winds bringing down trees and branches on Wednesday night and Thursday. The yellow warning will remain in place until midday on Thursday.

The status orange marine warning is for west to northwest gales or strong gales that are set to develop on Wednesday night and during Thursday on Irish coastal waters from Dungarvan to Mizen Head to Slyne Head, occasionally touching storm force for a time on Thursday morning.

The third warning from Met Éireann is a small craft warning that covers southeast to east winds backing northerly on Thursday morning, as well as cyclonic variable winds from Wednesday night. Winds will reach Force 6 or higher on Thursday on Irish coasts from Slyne Head to Rossan Point to Malin Head.

The outlook for the coming days is for cool and unsettled weather with occasional showers and autumnal sunny spells.

Friday will see sunny spells and scattered showers. Cloud will increase from the southwest during the afternoon. Highest temperatures on Friday will be between 11 and 13 degrees, in moderate to fresh northwesterly winds.

Saturday will be mainly dry, with good sunny spells and light northerly or variable winds. Highest temperatures will be between 11 and 14 degrees.

Sunday will see rain or showers over the southwest that will ease through the morning, while remaining mostly dry elsewhere. The weather will become a little milder on Sunday, which is forecast to see highest temperatures of 12 to 16 degrees, warmest over Munster.