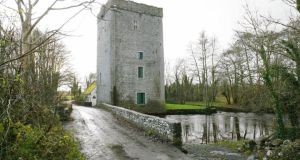 Thoor Ballylee in south Galway where WB Yeats would climb his “winding, gyring, spring treadmill of a stair” may become a new cultural centre if funding can be secured.

The society, chaired by Senator Fidelma Healy Eames, aims to open the centre in time for the 150th anniversary of the poet’s birth in June of this year.

Yeats bought the tower house in 1916-17 for a nominal sum, and used it as a residence. Originally owned by the de Burgo family, it was latterly part of Lady Gregory’s estate at Coole.

The centre would accommodate a new exhibition and lecture area, a cafe and bookshop, while surrounding gardens and a trail to the old mill would be developed, she said.

Thoor Ballylee, near Coole Park outside Gort, is prone to sporadic flooding, and has been repaired by Fáilte Ireland since it was extensively damaged in 2009.

Senator Healy Eames said the society was liaising with the National Yeats Steering Committee and the Yeats Society to ensure Thoor Ballylee was part of the Yeats 2015 programme of events.