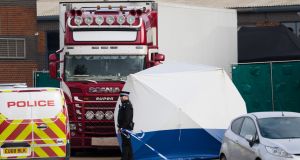 Police officers cordon off the area around the lorry at the scene in Waterglade Industrial Park in Grays, Essex where 39 bodies were discovered. File photograph: Vickie Flores/EPA

Another person has been arrested in Vietnam in connection with the 39 people found dead in Essex last month.

Reports from Vietnam say a suspect had organised for people to travel to Russia before being smuggled to the West.

On Monday, police in Vietnam arrested eight people in relation to the discovery of the 39 bodies. It follows the arrest of two people on Friday by Vietnamese police. It is now believed that all the victims found in the trailer were Vietnamese.

It said one of those arrested, who used to live in Russia, organised people to travel to Russia then smuggled them to Germany before getting to a third country.

The suspected truck driver, a man from Northern Ireland, has been charged with manslaughter and conspiracy to traffic people.

A second man is being held in Ireland pending extradition and has been charged with manslaughter, human trafficking and immigration offences.

DNA samples for identification have been provided by 21 families from Nghe An and 10 from Ha Tinh province.

Police in Northern Ireland have yet to obtain a witness statement from the firm which owns the trailer in which 39 people were found dead in Essex last month.

A meeting between the PSNI, who had been requested to obtain the witness statement by Essex Police, and representatives of Monaghan-based Global Trailer Rentals (GTR) had been scheduled to take place on Monday.

However, the firm’s solicitor said that it had been postponed at the request of the police. Danny McNamee of Newry firm McNamee McDonnell said that his client remained available to meet police in the coming days. GTR has said it had no knowledge that its trailer was being used to smuggle illegal migrants into the UK.

It is expected that police will seek more details about the leasing arrangement between GTR and Ronan Hughes, the man wanted by police in Essex in connection with the discovery of the bodies. Mr Hughes and his brother, Christopher, are both wanted for questioning on suspicion of manslaughter and human trafficking.

The trailer was leased to Ronan Hughes, who gave a Monaghan address matching that with a defunct business once run by his brother as C Hughes transport. Christopher Hughes still runs a Northern Irish-registered entity called C Hughes Logistics.

The two men are believed to be in Co Monaghan, and the gardaí have no evidential basis for interviewing them as they are not suspected of any crime in the Republic. Essex Police are yet to issue a European Arrest Warrant (EAW) for either man, which would enable the gardaí to arrest them in advance of extradition to the UK. Police spoke to Ronan Hughes in recent days, but have been unsuccessful in their attempts to convince him to agree to questioning.

Another man, Eamon Harrison, who was arrested at Dublin Port driving a truck linked to the Hughes brothers, is the subject of an EAW and appeared in the High Court in relation to the matter last week.

In addition to the lease, the police are likely to want to hear more from GTR about what the firm’s GPS unit says about the trailer’s movements in the run up to the fateful discovery. It is understood that GPS data shows the trailer made the two stops in Thurrock, close to the industrial estate where the bodies were found.

While a precise timeline is not known, the previous trip is thought to have occurred between the 17th and 22nd of October. The data indicates that the trailer made two return trips between Britain and Europe in the days leading up to the discovery, the second of which culminated in the find.

Also on Monday authorities in Greece found 41 migrants in the back of a refrigerated truck after a random inspection on a highway in the north of the country, police said. Among them were 39 migrants from Afghanistan, and one each from Iran and Syria, said a police spokesman in Komotini, a city in the northern region of Thrace. The driver, who is Georgian, was detained and faces charges of human trafficking. The refrigeration system was turned off.

Eight of the people in the truck were taken to a hospital as a precaution, the spokesman said. – Additional reporting from AP