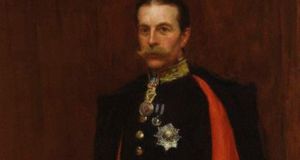 A portrait of Lord Houghton wearing the insignia by Walter Frederick Osborne, which is in the National Portrait Gallery in London

Ceremonial jewels worn by the Viceroy of Ireland 120 years ago have been discovered in a duchess’s London bank vault and will be sold at auction on Wednesday. The insignia of the “Most Illustrious Order of St Patrick”, worn by Lord Houghton while serving as Queen Victoria’s lord lieutenant of Ireland in Dublin during the 1890s, were inherited by his daughter Mary, Duchess of Roxburghe.

Following her death in England last year at the age of 99, her estate is being sold at Sotheby’s, whose auctioneers were dispatched to draw up an inventory of her possessions. They found her father’s grand master’s badge and star of the Order of St Patrick hidden away in trunks filled with tiaras and other family treasures in the vaults of Hoare’s private bank.

The Order of St Patrick was the British monarchy’s order of chivalry – a branch of the honours system – used to reward those in high office in Ireland. Members – men only and limited at any time to 22 – were known as knights of St Patrick and held ceremonies in St Patrick’s Hall in Dublin Castle, the headquarters of British rule in Ireland.

They wore elaborate costumes including velvet plumed hats sporting red, white and blue feathers, a hooded blue mantle lined with white silk and insignia of collar, badge and star. The badge and star were each engraved with the Latin motto Quis Separabit? (Who will separate us?) The knights commissioned their own sets of badge and star from leading Dublin jewellers including West & Co.

A portrait by Irish artist Walter Frederick Osborne of Lord Houghton wearing his regalia in Dublin in 1894 is in the collection of the National Portrait Gallery in London.

A leading figure in the Liberal Party, Lord Houghton was elevated to become the first Marquess of Crewe and served in various government jobs before becoming chairman of Imperial College, London. He died in 1945.

Sets of the Order of St Patrick insignia very rarely appear on the market and only a few examples are known in museums. Although made of gold and silver, the stones are non-precious. That has not stopped Sotheby’s from estimating the insignia’s value at up to £12,000.

The high valuation is linked to their historical significance and enhanced by the mystery surrounding the priceless “master set” of badge and star – made with pink and white diamonds, emeralds and rubies from the collection of George III’s wife Queen Charlotte – and presented to the order in 1830. Known as the Irish Crown Jewels, they were stolen from Dublin Castle in 1907 – years after Houghton had departed – in a robbery that attracted international media attention and remains one of Ireland’s greatest unsolved crimes.

The Order of St Patrick became dormant in 1922 following Independence but still exists and Queen Elizabeth remains its sovereign. The last Knight of St Patrick – Prince Henry, Duke of Gloucester – died in 1974.

The auction also features a collection of Victorian Irish art inherited by the duchess from her father, who bought the paintings in Dublin during his term as viceroy.

Two men arrested after raid on bookmakers foiled by pensioner 16:26
Moving Luke Kelly sculpture suggested as response to vandalism 16:23
Police officer ‘kicked in the face’ while clearing crowd from beach 15:30
Irish tourists excluded from visiting Greece as country begins its tourism season 15:07
Firefighters battle to keep forest fire away from an explosives factory 14:55