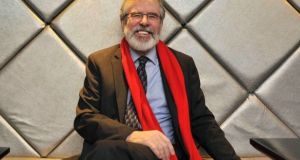 If Gerry Adams pursues a compensation case he could be in line for a six-figure payment.

A decision to provide Gerry Adams with more than £106,000 (€118,000) in legal aid has been defended as legally sound and based on normal criminal appeal court procedures.

Traditional Unionist Voice leader Jim Allister was informed in a freedom of information request that the former Sinn Féin leader received £106,476.49 plus VAT in legal aid to cover his costs in an unsuccessful case in the UK court of appeal two years ago.

On Thursday Mr Allister described this payment as a “legal kick in the teeth for victims”.

Mr Adams’s solicitor Séamus Collins said, however, his client received legal aid because of the “merits of his case” and that in such criminal appeals a person’s financial means very seldom applied.

In February 2018 the court of appeal rejected Mr Adams’s claim that his convictions for – in 1973 and 1974 – attempting to escape from the Maze Prison, where he was interned without trial, were unlawful.

Mr Adams appealed that decision to the London supreme court which last week quashed the convictions because his detention was not “personally considered” by a senior British government minister, as was legally required.

This prompted Mr Allister to contact the North’s Legal Services Agency which informed him that Mr Adams’s costs in the court of appeal case were met through legal aid.

Mr Allister had queried “how on earth was [Mr Adams] deemed eligible given his apparent financial means, including a generous pay-off from the Irish taxpayer when he retired as a TD. While many innocent victims have never had their day in court, Adams has been happy to use the British legal system. Not only that but the tax payer has footed the very substantial bill to allow him to do so”.

Ulster Unionist Party MLA Doug Beattie asked “just how and why someone with the expansive means of Gerry Adams – through book sales and pensions from Westminster, Stormont and the Dáil, plus property owned – be entitled to legal aid when so many victims are told they are not entitled to it?”

In other cases, applications were made to the legal aid department which examined issues such as the financial means of the applicant.

Mr Collins added that in criminal appeal cases the chief focus was on whether the case had merit and in this instance the court of appeal, while rejecting Mr Adams’s case, “certified there was a point of law of general public importance”.

The solicitor also explained that because Mr Adams was convicted in a non-jury Diplock court in the mid-1970s he had an automatic right to appeal to the court of appeal. That appeal did not happen until more than 40 years later because of new information that emerged in 2009 supporting Mr Adams’s case.

The overall bill in relation to the former Sinn Féin leader will be considerably higher than £106,000. Because Mr Adams won his appeal the supreme court this week ruled that his legal costs for the supreme court hearing should be met by the Northern Ireland Secretary Brandon Lewis. That cost has yet to be estimated.

If Mr Adams pursues a compensation case he could be in line for a six-figure payment. Moreover, his successful appeal could lead to other former internees taking cases for compensation.

Pete Taylor takes personal injury case over Bray gym shooting 02:00
Strict rules on queuing as Dublin shops prepare to reopen 02:00
President expresses ‘greatest heartbreak’ at clashes with protesters in US 01:19
How to get one dance step ahead of Covid-19 01:00
All pupils will not be able to return to class at the same time – INTO 01:00

1 Tyrone midwife on the cover of Vogue magazine
2 Barack Obama urges those protesting in US to seize the momentum
3 Covid-19: Varadkar downplays expectation of accelerated lifting of restrictions
4 Coronavirus: A further 123 cases reported in meat processing plants over past week
5 Mother of three (41) who had to fundraise for her own cancer treatment has died
Real news has value SUBSCRIBE