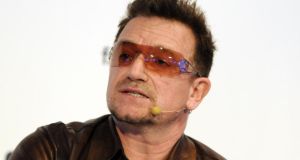 Bono: “Marriage is not owned by any church, but instead owned by the community.” Photograph: Dave Meehan

U2 singer Bono has stated that the Yes vote in the marriage referendum was a “moment for true equality” in Ireland.

Speaking on stage in Phoenix, Arizona, where U2 are on their world tour, Bono quoted from the band’s song One when he stated: “Millions turned up to vote yesterday to say love is the highest law in the land .

“And in the biggest turnout in the history of the State (sic), to say love is the highest law in the land.

“If God loves us, whoever we love, wherever we come from, then why can’t the State?”

The band dedicated Pride (In The Name of Love) to the cause of marriage equality. Bono introduced Beautiful Day by stating: “We’re putting the gay back in Gaelic!”

Speaking in Vancouver ahead of the start of the iNNOCENCE + eXPERIENCE earlier this month, Bono endorsed a Yes vote in the referendum.

“Marriage is not owned by any church, but instead owned by the community who should decide who it does and does not apply to.”

The definition of marriage had changed through the millennia, he pointed out. Jesus was not married and many characters in the Bible had several wives.

He described commitment as “one of the most impossibly great human traits, the hardest to hold on to.

“Anything that enshrines that is a wonderful thing. Marriage is nearly impossible. Wherever it is occurs it should be encouraged.”