U2 pay tribute to Dennis Sheehan at Los Angeles concert 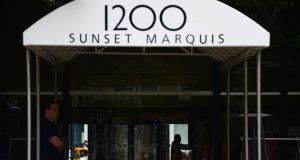 U2 have paid tribute on stage to their late manager Dennis Sheehan who died suddenly on Wednesday.

The death of Mr Sheehan (68) shocked the band who are in the middle of their iNNOCENCE + eXPERIENCE world tour.

Before they went on stage at the Los Angeles Forum on Wednesday night, U2 invited the evangelical preacher Rick Warren backstage to help them deal with the shock.

Mr Warren wrote on his Facebook page: “Dennis was a calm and kind Christian man. The team is heartbroken so Adam, Larry, Edge, and Bono asked me to share some scripture, words of comfort, and pray with them right before they walked on stage tonight.

“After sharing the ‘Choose Joy’ story from my son’s death, I asked ’So how do you go out and do a concert when your heart is hurting?’ Bono said ‘We choose joy!’”

A native of Dungarvan, Co Waterford, Mr Sheehan had been the band’s tour manager since 1982. He died of a suspected heart attack at the Sunset Marquis Hotel, west Hollywood, where he usually stayed when he was in Los Angeles.

Speaking on stage at the Forum, Bono said Mr Sheehan was part of U2’s “extended family. It takes a lot to put on a show like this. Last night we lost a member of our family.

“Many U2 songs over the years were written to fill a void, an absence, a hole in a heart left by a loved one. With the loss of Sheehan, U2 now has such a wound.”

He revealed that it was Mr Sheehan who got the crowd to sing at the refrain at the end of the song 40 which was included on the Live at Red Rocks album, one of the albums which cemented the band’s reputation as a live act.

“And whatever happened that night, nobody was singing the refrain. So we were backstage just trying to figure out what the hell was going on and trying to make it happen. We just heard this lone voice, this single voice, singing ‘How long to sing this song’ – a light voice, beautiful tremolo,” Bono said.

Robert Plant also paid tribute to Mr Sheehan when he received a lifetime achievement award from the live music industry in 2008 saying he would remember him as a man “of guile and charm”.

“Every afternoon at 4pm you got me out of bed. You walked me around the room to get my blood circulating for the day and you ironed my satin green flairs.”

Mr Sheehan’s death is the third major bereavement around U2 this year. In February their long time spiritual mentor Pastor Jack Heaslip died and drummer Larry Mullen’s father died just before they started their world tour in Vancouver earlier this month.

Mr Sheehan was found dead at 5.40am local time (1.40pm Irish time) on Wednesday, May 27th. He is thought to have died of a suspected heart attack.

The Los Angeles County Fire Department confirmed they responded to a cardiac arrest call at the hotel.

Mr Sheehan was born in Waterford, but grew up in Wolverhampton. In 2008, he was given a Parnelli Lifetime Achievement Award in Las Vegas for his long-term work with U2.

He started playing in bands in his teens before becoming a roadie. He worked with Led Zeppelin during the 1970s when they were the biggest band in the world and learned how to deal with large stadium tours.

He was approached by U2’s early producer Robbie McGrath to manage the band just as their career was taking off. In 1984, Mr Sheehan predicted U2 would be one of the biggest bands in the world.