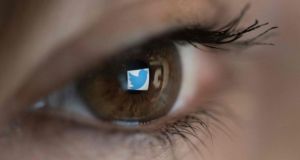 Issues can win a higher Twitter profile through repeat, multiple postings of the same content, usually with the same hashtag

Twitter has rejected charges from anti-abortion referendum campaigners in Ireland that it has restricted the audience they can reach, but it warns that it will not allow debate to be manipulated on its site.

Peadar Tóibín, the Sinn Féin TD and anti-abortion campaigner, complained that a dozen Right2Life Twitter users have complained their messages have been restricted by the company.

1 Donald Trump’s political success is based on racism
2 Why you still can’t have a European holiday this summer. Or can you?
3 The night shift: ‘In 38 years, I’d never seen an owl in the city centre’
4 Oliver Callan: ‘I was a perfect candidate for exploitation’
5 Fintan O’Toole: The violence of racism is deeply embedded in American society
6 Ireland earns ‘right to be hopeful’ again as Government fast-tracks plans to reopen country
7 David McWilliams: We won't have another 1980s-style recession
8 Pubs reopening will not mean ‘fellas having a few pints and peanuts’, Holohan warns
9 Ross O’Carroll-Kelly: ‘We’re having a fancy dress porty. I’m going as the wife of a philanderer’
10 ‘White Irish people have never had to think about this’
11 Coronavirus: People to be allowed to travel anywhere in their county from Monday
12 Covid-19 restrictions: What you still can’t do this weekend
13 Coronavirus: UK scientists call for preparation for second wave
14 Tyrone midwife on the cover of Vogue magazine
15 Why is Germany suddenly embracing its inner Keynesian?
16 Unlocking Ireland: What exactly will happen in reconfigured phase two on Monday?
17 Plans lodged for demolition of The O’Rahilly house
18 Dublin nursing home to close as it ‘cannot meet regulatory requirements’
19 Prospect of foreign travel highlights remaining restrictions here
20 O’Doherty and Waters ordered to pay legal costs of case against State over Covid-19 laws
21 Irish parents on schools reopening abroad: ‘It has gone suprisingly smoothly’
22 Irish fears for Brexit talks if Hogan gets top WTO job
23 Paul Flynn: ‘I still have all my old menus. One dish stands out: bang bang chicken’
24 Betting shops face uncertain future as they prepare for Monday reopening
25 Passengers face queuing in car parks at Dublin Airport
26 California police fatally shoot 22-year-old man on knees with hands up
27 Trump’s claim it was a ‘great day’ for George Floyd is criticised
28 Donald Trump is in trouble, and that could spell very bad news
29 Tesla’s Elon Musk calls for breakup of Amazon in tweet
30 Hosepipe ban looms: ‘We’re drinking tomorrow’s water today’
31 Father Ted creator to publish spoof Dominic Cummings diary
32 America is not broken, it was built this way
33 Government formation: Greens blame ‘slow’ Fine Gael for talks paralysis
34 Cliff Taylor: Ireland steps on to a shaky financial tightrope
35 ‘Summer is not lost’ - Taoiseach announces accelerated easing of coronavirus restrictions
36 Tianna Bartoletta: ‘After you’ve gotten your medal, you become black in America again’
37 Pat Leahy: Time for the parties to stop play-acting and decide
38 Brother is dragging his heels as executor of uncle’s will - is there anything I can do?
39 Joe Biden officially secures Democratic presidential nomination
40 Dublin city playgrounds to remain shut despite Taoiseach’s announcement
Real news has value SUBSCRIBE