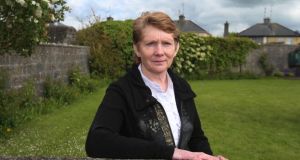 Local historian Catherine Corless at the site of a mass grave for children who died in the Tuam mother-and-baby home, Galway: work was praised by Prof Liam Delaney. Photograph: PA

Prof Liam Delaney, the lead author on a 2010 study entitled From Angela’s ashes to the Celtic tiger: Early life conditions and adult health in Ireland, said the rates of infant mortality in such homes deserve to be the subject of an investigation.

Infant mortality in Ireland in the 1930s and 1940s was in the region of 70 per 1,000 or 7 per cent, as high as countries in sub-Saharan Africa have now. It was higher in Dublin than in rural areas such as Tuam running at 10 per cent because of crowded conditions and poor sanitation.

1 Brazilian father to be deported days after daughter’s birthday
2 Ireland suffer Twickenham torture yet again as England dominate
3 Coronavirus: Austria stops all train services with Italy to contain spread
4 England 24 Ireland 12: How the Irish players rated at Twickenham
5 Costa living: ‘Move home to Ireland? I’d hate it’
6 Ryanair and Aer Lingus monitor impact of conronavirus on travel to Italy
7 What evidence is there that the IRA still controls Sinn Féin?
8 The words many a journalist dreaded hearing: ‘This is Stephen Joyce’
9 Bank leaked my loan request to family who tried to rip me off
10 Clare houses surrounded by water evacuated as rainfall warning
11 Maureen Dowd: For the White House parasite, all restraint has gone
12 Jennifer O’Connell: Why are women in midlife so unhappy?
13 TV View: Sunday Bloody Sunday . . . Not Bono’s fault but Boy, that was Bad
14 Anti-Irish bigotry in Britain has not gone away
15 My husband is acting like an extra child in the family
16 Steve Coogan: ‘Come Out, Ye Black and Tans is two fingers to the British’
17 Could a product from Lidl or Aldi change your life?
18 Portraying Sinn Féin as a dangerous party is a political strategy
19 England held all the aces in defining battle of the breakdown
20 David McWilliams: Germany needs a new business model
21 ‘The IRA has gone and they are not coming back. That’s the reality’
22 Mastercard to create 1,200 new jobs by expanding base in Dublin
23 Johnson orders Brexit team to ‘get around’ Northern checks protocol
24 The Boris bridge: Will Johnson’s ‘vanity project’ ever happen?
25 Is my drunken, abusive husband capable of change?
26 Boris Johnson's new immigration regime will damage much more than industry
27 Kevin Seaward runs second fastest Irish marathon time to qualify for Olympics
28 Conor Pope’s good-value guide to happy family camping holidays
29 Efforts ongoing to prevent pollution from MV Alta wreck
30 MV Alta: The unmanned voyage of the Ballycotton ‘ghost ship’
31 Galway prove their winning quality with Tyrone demolition
32 Easy homemade pizza that your kids will love
33 Would you kill one person to save five? Depends if you’re a millennial or not
34 ‘We would go back in a heartbeat’: Readers share their best family holidays
35 Floods in the midlands: ‘If this was happening in Dublin it would be front-page news’
36 30 great family holiday destinations in Ireland and abroad
37 ‘I wouldn’t be here without it’: The importance of exercise to teenagers
38 Disappearance of pregnant refugees raises trafficking fears in Netherlands
39 Ryanair’s Michael O’Leary under fire for comments on Muslim men
40 Pat Leahy: Fianna Fáil and Fine Gael will not crawl off and leave McDonald the stage
Real news has value SUBSCRIBE