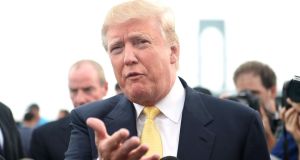 US billionaire Donald Trump has finally won his battle against plans for a giant wind farm near his Doonbeg golf course – thanks to a little-known fresh water pearl mussel.

The inspector in the case recommended a refusal to the wind-farm – 20 ft taller than Dublin’s Spire – on a number of grounds, including the impact the wind farm would have on views from the golf resort.

However, in the end, the board refused planning permission on only one ground – the impact the wind farm would have on the fresh water pearl mussel.

In its order, the appeals board stated that it is not satisfied that the proposal would not constitute a serious risk of impairment to the aquatic habitat of this sensitive species – the EU-protected fresh water pearl mussel in the Doonbeg river.

A spokesman for the Trump International Golf Links and Hotel at Doonbeg said last night that the firm “is pleased with the Board’s decision to refuse permission as the visual impact of wind turbines in the area is not good for our business and tourism in general”.

The decision brings to an end a four-year long battle by Doonbeg golf club and other local interests to prevent wind-farm development in Doonbeg.

In 2013, An Bord Pleanala refused planning permission to a 2011 plan to construct a 45 turbine wind-farm at Doonbeg.

The current 413ft high wind farm was to be located only four km from the golf resort and in the objection, consultants employed by the Trump golf club resort claimed that the wind-farm “will have a detrimental impact on the viability of the Doonbeg Golf Resort”.

They state: “The resort primarily relies on bookings from international and in particular the North American market and a reduction in bookings as a consequence of the visual impact from the proposed development will have a serious negative impact on tourism in the area.”

The board made its ruling on the nine-turbine plan following Dr Evelyn Moorkens lodging a report warning that the planned wind farm “is an extremely dangerous proposal” to the mussel nearby.

She said that there are an estimated 7,000 pearl mussels in the Doonbeg river and has previously described the pearl mussel as “our tiger, our panda”.

The ancient mussel – that has a life span of 120 years – has existed virtually unchanged for around 50 million years with 90 per cent of all freshwater pearl mussels known to have died out across Europe during the 20th century.

Mr Trump led the charge against the planned wind-farm that attracted 42 objections, including widespread local opposition in Doonbeg and from Friends of the Irish Environment (FIE), while An Taisce and the Irish Peat Conservation Council (IPCC) also expressed their concerns over the project.

The decision will disappoint 23 landowners in the area who stood to receive an annual dividend from allowing the turbines be built on their lands.

The most recent accounts for Clare Coastal Wind Power Ltd to the end of December 2013 show that the firm was nursing total losses of €426,071 from its ill-fated Doonbeg wind farm plan that has now been refused twice.

The inspector in the case recommended refusal as the wind farm would seriously detract from the tourism resource of the area due to the height, scale and location of the proposed development within an open, exposed and low-lying landscape, and the scenic route along the N67 Wild Atlantic Way and tourist amenities in the area, including the Doonbeg Golf Resort.

The inspector stated that the plan would seriously injure the amenities of the area by reason of visual intrusion and overbearing visual impact.