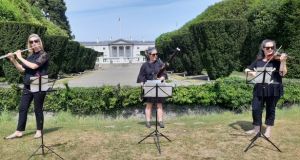 President Michael D Higgins was lured from lockdown on Sunday by the strains of an ensemble serenading him outside Áras an Uachtaráin.

Without access to their usual rehearsal rooms, Elizabeth McLaren, Hilary Sheil and Ríona Ó Duinnín – all players with the RTÉ National Symphony Orchestra – decided to meet for a socially-distanced practice in a sun-kissed Phoenix Park.

After tuning up, violinst McLaren tweeted the President – sole patron of the orchestra – to let him know there were some musicians “outside the Áras right now, serenading you, our Patron, on this glorious sunny day”.

A little into their surprise afternoon performance, which had gathered a modest audience, Mr Higgins appeared outside his official residence, dressed in a navy suit, blue shirt and Panama hat.

Just when I thought I couldn’t possibly feel prouder to be Irish, our beloved @PresidentIRL strolls out to listen to an impromptu open air concert by @RTE_NSO - this wouldn’t happen in any other country in the world. Ireland 🇮🇪 I love you! ❤️ pic.twitter.com/YuBSPnaKuO

The President strolled, walking stick in hand, with one of his dogs, Bród, by his side, along the Irish yew-lined avenue that leads from the front of the Áras towards Chesterfield Avenue to get within earshot of the trio.

Mr Higgins could be seen waving his Panama hat in appreciation, as McLaren, bassoonist Sheil and flautist Ó Duinnín offered him a rendition of Leonard Cohen’s Come Healing, which they cited a favourite of the President’s.

A short video clip of the break from lockdown tedium posted on Twitter went viral and has been viewed more than 230,000 times.

McLaren said the National Symphony Orchestra was “delighted so many people enjoyed it, and we were especially excited when the President (and his dog) came out to listen. He is a wonderful and supportive patron”.