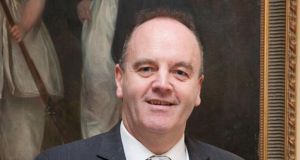 A native of St John’s Park but resident in Ballygunner, where he represented Waterford City East, the late Cllr Gary Wyse was the sole Fianna Fá a il member of Waterford City Council the council as well as chair of the local authority’s Environment Strategic Policy Committee. Photograph: Facebook

Mayor of Waterford Cllr John Cummins yesterday led tributes to council colleague and father of four, Cllr Gary Wyse, who died suddenly today at the age of 50, just four years after he was first elected to the local authority.

A native of St John’s Park but resident in Ballygunner, where he represented Waterford City East, the late Mr Wyse was the sole Fianna Fáil member of the council as well as chair of the local authority’s Environment Strategic Policy Committee.

Mr Cummins said he wanted to express his condolences both personally and on behalf of Waterford City Council to Mr Wyse’s widow, Michelle, and the couple’s four children, on their tragic loss.

“News of Gary’s passing spread rapidly across the city on Tuesday afternoon and there’s a genuine feeling of shock for all of us who knew and worked with him on the council and in other aspects of city life,” he said.

“As well as being a public representative, Gary was a very well known businessman and personality in our city ... I know Gary was particularly passionate about the city centre and the need for it to be the prime retail destination in the region.”

Fianna Fáil leader Micheál Martin extended his sympathies to Mr Wyse’s widow, children and mother on his untimely death, saying he was struck by the genuine warmth and regard that people in Waterford had for him.

“Gary was an example of what is best about community politics in our country. He was devoted to improving his native Waterford City, providing employment and working to maintain and improve services for his most vulnerable neighbours,” said Mr Martin.

“When the Fianna Fáil parliamentary party travelled to Waterford recently for our pre-Dáil term strategy meeting, we had the opportunity to hear directly from Gary on the challenges facing the city and his ideas for improving the region.

“As always, we were hugely impressed by his infectious energy and enthusiasm for his community and the challenges it faced. I left Waterford with every confidence that Gary had a productive and successful career in public service ahead of him.”

Waterford city manager Michael Walsh also paid tribute to the late Cllr Wyse, who ran a successful carpet retail business for over a quarter of a century. He described his sudden death as “a desperate shock” for Mr Wyse’s family and friends, as well as all at City Hall.

“Over more than four years representing the Waterford City East electoral area on the city council, Gary showed himself to be a hardworking and very capable public representative,” said Mr Walsh.

“He worked hard for the area that he had his electoral base in, but also took a city-wide view and had a clear vision of where the city needs to go to reach its full potential. His untimely passing represents a real loss to Waterford.”