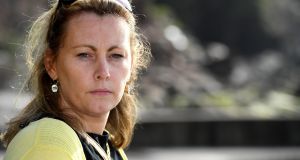 The family of the late Emma Mhic Mhathúna has said that she was a “strong and courageous lady and will be remembered as such”.

Ms Mhic Mhathúna, one of the women affected the CervicalCheck controversy and a mother of five children, died on October 7th last year, at the age of 37.

A statement issued for the first anniversary of her death by her father, Peter Duffy, her five children and her family said that “a bright light in our lives was extinguished and her beautiful and brave voice silenced. Her pain and suffering was thankfully at an end as she was reunited with her Mam. Five wonderful children tragically lost their Mam at such a tender age in circumstances that are too difficult to contemplate not to mention understand.”

Ms Mhic Mhathúna’s family thanked family, friends, neighbours, and the public for their support and said “hopefully something positive will come from her journey and her passing”.

The Mhic Mhathúna family also thanked the media for the portrayal of her story and asked people to keep her “in your hearts and minds today, to remember her fondly and her children as they re-build their lives without their beloved Mam”.

On Saturday her former partner, Colin Mac Mhathúna, said in a statement that he and their children “will never forget her”. He and their three sons, James, Mario and Donnchadh, shared private prayers and a blessing with the parish priest in their home in west Kerry on Saturday and later walked to Ballydavid pier to place flowers.