Too early to bet against white Christmas, says Met Éireann

It was unusually dry and mild last month, according to official figures 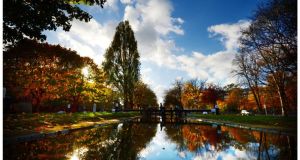 Mild weather: A man crosses a lock as bright blue skies and sunshine reflected in the waters of the Grand Canal near Baggott Street in Dublin. Photograph: Bryan O’Brien/Irish Times

It was an unusually dry and mild November, according to figures from Met Éireann.

Rainfall levels were between one third and half usual levels for the month ,with some of the least rain falling in Dublin and on the east coast.

Just 21.6 millimetres of rain was recorded at Casement Aerodrome in Baldonnell, compared to an average for the region of about 73.7millimetres.

The Malin Head station was however wetter than average with 116mm of rain falling. The average at Malin Head in November is 108.6.

Met Éireann’s Gerald Fleming said despite the general mildness average air temperatures were down at many stations, when compared to annual averages for November.

Mr Fleming laughed at the prospect of predicting the weather for the latter half of month, particularly the prospects for a white Christmas.

“You can’t predict that with any reliability” he said.

Tomorrow will stay dry in most areas with generally cloudy skies, though a few brief sunny breaks may develop, Met Éireann has said.

In the west and northwest there will be patchy drizzle in coastal areas.

Highest temperatures will range from seven to 11 degrees with light southerly breezes in most places; but winds will freshen near western coasts.

Tomorrow night will be dry at first, but cloud and rain will move into western parts later in the night. Lows of 1 to 4 degrees Celsius in general, but along the west coast it will be milder.

Temperatures will drop midweek to about minus one or plus two degrees Celsius and cold conditions look like lasting into next weekend. Very low daytime temperatures and some bitterly cold and frosty nights are expected to feature, but it is expected to become dry on Saturday and Sunday.