Decision was ‘short sighted, flawed and a kick in the teeth for Cashel and Cahir’, says chamber of commerce 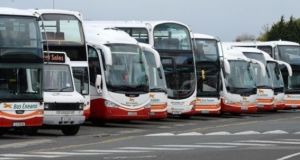 Bus Éireann announced on Monday that some of its Expressway services are to cease. File photograph: Dara Mac Dónaill

A campaign by people in Tipperary to persuade Bus Éireann to reverse its decision to axe its Dublin-Cork Expressway service has already received the support of almost 600 people who have signed a petition against the move.

The campaign by people in Cashel and Cahir, who often use the service to commute between the two towns, was launched on Tuesday and is gaining support among business people and residents in both towns.

Bus Éireann announced on Monday that its Expressway services between Dublin and Cork, Dublin and Galway and Dublin and Limerick are to cease, and the Dublin-Belfast service is to be suspended indefinitely.

The move is in response to significant medium-term challenges posed by Covid-19 in order to safeguard Expressway’s remaining 14 national routes and meet demand required on other city and commuter services, said Bus Éireann.

According to Bus Éireann, no cessation dates have been determined as yet but changes are likely early next year when the current commercial bus operator emergency supports to the Cork, Limerick and Galway routes expire.

But now campaigners in Cashel and Cahir have launched an online petition to garner support in an effort to persuade Bus Éireann to reverse what they say is a vital service for the people of Tipperary.

Cashel Chamber of Commerce president Martin Lynch said the removal of the X8 Expressway service from Dublin to Cork was “short sighted, flawed and a kick in the teeth for Cashel and Cahir”.

“We need the public’s support on this and I’m asking everyone to sign this petition calling on Bus Éireann to urgently review and reverse this nonsensical decision,” he said.

Independent Cllr Andy Moloney from Cahir has also urged people to sign the petition, saying the loss of the service would be a huge blow to Cahir which is centrally located in Munster and needs maximum connectivity.

“Cahir is the crossroads of Munster and the X8 is an essential link for connecting buses from Limerick to Waterford with those from Dublin and Cork. We cannot allow this service to be removed,” he said.

Meanwhile, Cllr Ted Tynan, a member of Cork City Council, said the decision to axe the Expressway services was a result of the National Transport Authority over -issuing licenses to private operators on these routes.

“These licenses do not require the private operators to stop at intermediate towns and villages as Bus Éireann does. Therefore they are more attractive to passengers who just want to travel between say Cork and Dublin.

“However, the intermediate towns and villages will be left without a service when Bus Éireann ends the Expressway route,” said Cllr Tynan, a member of the Workers Party.

Cllr Tynan pointed out that Bus Éireann operated throughout the coronavirus lockdown where as private operators did not and this showed that they were not interested in providing a public service, only making a profit.

And he suggested that the Bus Éireann Expressway routes could be saved by converting them to Public Service Obligation (PSO) routes, as they provide an important social service. This would enable them to be publicly funded.

Cllr Tynan also accused the Minister for Transport Eamon Ryan of “washing his hand of the issue and despite all the bleating by the Greens about the need for public transport, he is prepared to toe the Fine Gael line when a crisis arises”.

Earlier this week, Mr Ryan said the Government would offer its full support to ensure the public service would be able to continue and said Bus Éireann’s decision to axe the services was to consolidate the remaining services.

“Bus Éireann feel they would be better off focusing where demand is growing and bus services are lacking, such as Louth and Meath where you have growing populations. It was a commercial decision and one they’re entitled to make.

“It’s very much a company decision for them to strengthen and protect their network. They’re going to employ additional drivers for the new services that they’re adding,” he added.