Navy vessel has rescued more than 3,300 migrants in Mediterranean mission 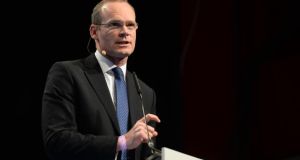 Minister for the Marine Simon Coveney one of three Ministers who have flown to Malta to pay tribute to the crew of the Naval Service patrol ship LÉ Eithne. Photograph: Dara Mac Dónaill

Three Government Ministers have flown to the Maltese capital of Valletta to pay tribute to the 68-strong crew of the Naval Service patrol ship LÉ Eithne, who have rescued more than 3,300 migrants in the Mediterranean Sea.

Minister for Defence and Marine Simon Coveney, Minister for Justice Frances Fitzgerald, and Minister of State for Development Seán Sherlock will today board the ship, which berthed early yesterday in Valletta harbour.

They will be met by Cmdr Pearse O’Donnell and Mr Coveney will inspect the ship’s guard of honour and address the crew.

The LÉ Eithne, which is due to be replaced by the LÉ Niamh and return to Ireland at the end of the month, berthed at 6am yesterday under Valletta’s Saluting Battery.

Since it was deployed in May on the Naval Service’s first overseas humanitarian mission, the LÉ Eithne has conducted 22 operations and rescued 3,376 people of various nationalities from craft ranging from barges to wooden boats to dinghies.

Some 2,664 of those rescued have been male and 533 female; 179 were children, of various nationalities.

They were among an estimated 150,000 who have embarked in unseaworthy and overcrowded craft from the Libyan coast so far this year.

The EU initiative was taken after some 900 migrants drowned in the Mediterranean in April, making it the worst migrant disaster in European waters so far.

Italy had launched its own search-and-rescue mission in 2013 after 366 migrants drowned off the island of Lampedusa, but the politically unpopular Mare Nostrum project was replaced last year by a more limited EU Triton operation, which focused on border control.

Minister for Foreign Affairs Charlie Flanagan said at the weekend that an unfair burden had been placed on countries in the region such as Italy and Malta.