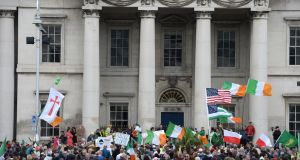 Up to 2,000 people marched through Dublin City Centre on Saturday in protest at the wearing of face masks.

The march was organised by a group called Yellow Vest Ireland, which describes itself as a “people’s movement” that is “not aligned to any political group, organisation or politician”.

The group congregated at 2pm at the Custom House before marching through the city. There was little sign of social distancing at the event and protestors did not wear masks.

Many on the march carried banners with slogans such as “take off your mask” and “it’s only a common cold”.

There are at least 3,000 coronavirus deniers marching through Dublin city centre. Slogans range from “take off your mask” and “it is only a common cold” to “wake up people”. #Covid19Ireland pic.twitter.com/w54eE4J7RN

Several streets were closed to traffic to accommodate the march. A spokesman for the Garda said there were no arrests and no major incidents.

“We have no reports or any incidents or arrests related to the demonstration in Dublin City centre earlier today,” gardaí said in a statement.

“ The group involved gathered on Custom House Quay from approximately 1pm and proceeded from there to Government buildings. Rolling road closures were put in place to facilitate the safe movement of those involved and the flow of traffic in the city centre. The demonstration has since concluded and there are no traffic delays currently reported in the city centre.”

Yellow Vest Ireland encouraged attendees to bring flags on the march. “Yellow Vest Ireland wants everyone in Ireland to feel comfortable about bringing their national flags to this Saturday’s march,” it said on its social media platforms.

“Last weekend in Berlin, hundreds of thousands of protesters marched in opposition to unscientific mask and lockdown laws.”