The tapes, recorded by hotelier Dermot Ryan in 1967, are an exceptional political testament 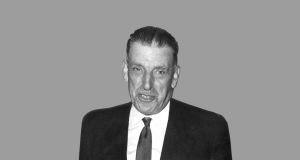 Seán Lemass: The Lemass tapes will substantially re-shape our knowledge and understanding of Lemass himself, of Fianna Fáil in and out of government, and political history in the four decades after 1932.

Old tapes can throw new light on history. Seán Lemass was a politician who never wrote an autobiography, but he left behind an extraordinary series of interviews, now seeing the public light.

6 Dáithí Ó Sé: ‘A baby comes along and you realise what life is really about’

8 Queues outside Penneys at 6am: ‘It’s great to get a bit of normality back’

10 Kevin McStay: Beautiful chaos of All-Ireland to end in a Dublin-Mayo final

13 No benefit to mask outdoors when socially distancing, says professor

14 With fees on the rise, is it time to switch current account?

17 Gerry Thornley: Maybe the new Ireland could do with a little of the old detail

20 Even with three new coronavirus vaccines, there’s always a but...

23 Anti-maskers: ‘Serve them and get them out as quickly as possible’

30 Coronavirus: What’s allowed and what to avoid this Christmas

34 Hugh Grant on the Undoing finale: ‘People are telling me how old I look’

35 ‘The system is strong’: Arizona and Wisconsin certify Biden’s US election wins

36 ‘Bodies left for weeks. People eaten by dogs’: What the Famine did to Ireland

37 Some 5,300 people waiting over two years for Irish citizenship application to be processed

39 WHO warns about risks of ski holidays and Christmas gatherings