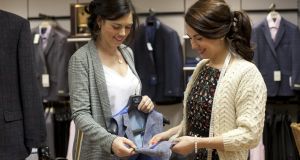 For generations, Standún, one of Connemara’s longest-established drapery stores, has thrived from the visits of Irish and foreign tourists, mostly Americans.

May and Máirtín Standún from Dublin, during a cycling holiday in 1946, came across the small drapery shop with a for sale sign on the outskirts of Spiddal, Co Galway. They decided to move and thus began three generations of history. However, the past year has been like no other.

“We have a lot of older customers and we noticed before we closed our doors temporarily in March that our footfall dropped dramatically due to fear,” said Clíona Standún Uí Áinle, who now co-owns the shops with her sister, Laragh.

The Government’s decision to reopen retail in December has been crucial to the shop’s survival, they say.

“November and December are our busiest months,” says Clíona. “It was exceedingly difficult to remain closed for the month of November although we did have a strong online trade. It’s hard to know if we could have survived the year with the doors closed in December as well.

“The shop was remarkably busy when we reopened on December 1st. There is a lot of support for local Irish businesses and a strong interest in supporting Irish brands and designers.”

The current lockdown has not been ideal for retailers. However, Clíona said it had not affected business much as January was not a particularly busy time for the store, making the enforced closure easier to accept. The store has always operated a click-and-collect service, which has become increasingly important.

“It wasn’t used very frequently as people enjoy browsing. However, since March our online and telephone orders have increased dramatically,” Clíona said.

“We have had to ensure everything we have is available on our website and we have had to increase the number of employees processing orders to keep up with the demand.”

Laragh Standún said the family had worked hard to build their social media profile in order “to reach out to new customers” and worked on its website to serve as “a platform to showcase our many ranges”.

Galway West TD Éamon Ó Cuív said the State must find ways to help stores like Standún to get through this crisis, and to be ready to face a retail world that may never be the same again.

“Covid has been helpful to small grocery stores. People shopped more local and that has continued. On the other hand, high quality drapery shops like Standún, that depend on the tourism sector, will be challenged,” he said.

Even with a vaccine arriving, normal life will take time to resume, the Fianna Fáil deputy believes.

“Some will not travel until Covid is fully gone. Many are elderly, retired. They are the people who have the time and money, but they are also the most afraid,” Mr Ó Cuív said.

“Things are not going to go back to the way they were, but there is no point complaining. We need to assist people so that their businesses can prevail. Life tells you that the innovative survive.”