The Guardian apologises to Máiría Cahill over Roy Greenslade article 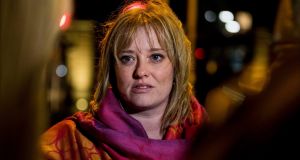 Greenslade criticised a BBC Spotlight documentary made about Maria Cahill’s case in which she stated that she had been raped by a senior figure in the IRA in 1997 at the age of 16 and that the IRA had attempted to cover up the rape. Photograph: Liam McBurney/PA Wire

Media outlet The Guardian has apologised to rape victim Máiría Cahill over an article written in 2014 by Roy Greenslade about her case.

The Guardian’s readers’ editor, Elisabeth Ribbans, said Mr Greenslade should have declared his support for the Provisional IRA when he wrote about the case.

Katharine Viner, editor-in-chief of the Guardian, and Alan Rusbridger, the editor when Mr Greenslade wrote the original article, have also apologised.

Mr Rusbridger said he was not aware of Mr Greenslade’s support for the Provisional IRA. The piece he had written for the Guardian in 2014 had dealt with the matter of transparency.

“Given Greenslade’s own lack of transparency, I can understand why Ms Cahill has identified an issue of double-standards. I am happy to associate myself with these apologies,” he told Times Radio.

Mr Greenslade criticised a BBC Spotlight documentary made about Ms Cahill’s case in which she stated that she had been raped by a senior figure in the IRA in 1997 at the age of 16 and that the IRA had attempted to cover up the rape.

In a news article for the Guardian’s media section, Mr Greenslade said the documentary had failed to disclose that Ms Cahill remained a member of Sinn Féin until 2007 and that she joined a republican splinter group afterwards.

Mr Greenslade concluded: “The feeling lingers that the programme was flawed by being overly one-sided. Cahill’s political stance should have been explored more fully.”

Ms Cahill complained to the Guardian this week following an article Mr Greenslade wrote in the British Journalism Review declaring that he been a supporter of the Provisional IRA during the Troubles.

He admitted that he concealed his support for the Provisional IRA throughout his time as a journalist and editor with various Fleet Street newspapers.

He wrote: “February 7th, 1972, was the first day of my long silence. I knew that to own up to supporting Irish republicans would result in me losing my job. I could have taken that step myself by walking out on principle. But the idea of forsaking a Fleet Street career – indeed, a career of any kind in journalism – was unthinkable.

“I couldn’t conceive of doing anything else. Join an agitprop publication? I couldn’t see a future there. Become a librarian, a schoolboy dream? It wasn’t really a feasible alternative. Anyway, I needed a wage because I was on the verge of taking on a mortgage. Better, then, to button my lip and carry on.”

Mr Greenslade also stated that he worked for Sinn Féin’s An Phoblacht under the pseudonym George King for decades.

“I came to accept that the fight between the forces of the state and a group of insurgents was unequal and therefore could not be fought on conventional terms. In other words, I supported the use of physical force.”

After Mr Greenslade’s admission, Ms Cahill complained to the Guardian about the fact that he had written about her case but had not disclosed his support for both the Provisional IRA and Sinn Féin, a party of which he is now a member.

In a statement which has been attached to the bottom of the original article by the Guardian, Ms Ribbans stated that Mr Greenslade has now offered a “sincere apology for failing to disclose my own interests” not just in the 2014 article but in relation to two more blogs relating to Ms Cahill.

She concluded: “Columnists are hired for their opinions but the readers’ editor considered that here the writer’s political position should have been indicated openly. The lack of disclosure was especially unfair to a vulnerable individual, and the Guardian has now apologised to Ms Cahill.”

Ms Cahill told The Irish Times that she is not yet in a position to “fully respond to their apology until I take advice on it, but I think they should go further than what they have done”.