Veteran broadcaster was a ‘fantastic character’ who was ‘always good humoured’ 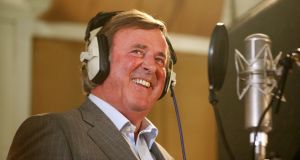 Childhood friends of Terry Wogan have paid tribute to the broadcaster, remembering him as “one of the lads”.

“Wogie”, as he was known by his former school friends in Limerick, spent the first 15 years of his life in the city.

Both recalled how the BBC veteran, like themselves, grew up dreaming of emulating their comic boyhood heroes “Dan Dare Pilot of the Future” and “Roy of the Rovers”.

Mr Sexton, a founding partner of Holmes O’Malley Sexton solicitors, grew up around the corner from Wogan, who lived at Elm Park, just off the Ennis Road.

Mr Sexton (77) remembered himself and Wogan as leading members of the “Elm Park gang”, running around their neighbourhood and using “jumpers for goalposts” for kickabouts on the green.

“The gang warfare between eight-year-olds is not going to rock the city, especially when our weapons were bows and arrows, made from sallys we cut down at Barrington’s Pier beside the river,” he said.

“We had fun. Our fort was our back garage, and we’d attack some of the guys from Elm Park and they’d attack us.

“At the end of the day, our mothers imposed peace. I have tinselled memories of it, I suppose.”

Mr Sexton added: “He was my best pal at school and I can safely say that not too many guys that I know, and have read about, have done enormously great or memorable things like Terry.”

Wogan, Sexton, and Neville, who were in an honours class at Crescent College, sat their Inter Cert exams a year early.

“Terry was a fantastic character,” he remembered.

“He was always good humoured but he had one problem, he was very bad at the Irish language.

He added: “He played rugby, but he was useless at that too.”

Referring to Wogan’s broadcasting skills, Mr Sexton remarked: “Let’s face it, if you can have an audience of eight million, and have that kind of audience over a period of five decades, that is some tribute.

“After that, Terry doesn’t need a tribute from me. It’s great that we were part of his life in some way.”