Teenagers ‘train surfing’ on Dart to be reported to gardaí 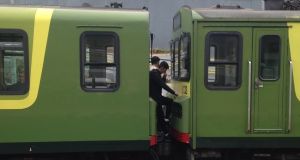 Pictures of youths “train surfing” – standing on the links between Dart carriages as the trains travelled across Dublin’s north side – are to be handed to gardaí by Iarnród Éireann.

The pictures, which surfaced on social media in the last few days, show two teenaged boys perched between nose-to nose driver carriages as a Dart arrived at Killester station.

They emerged as footage appeared online of youngsters clinging to the back of a number 27 bus as it made its way through Jobstown, Tallaght, in recent days. The high-risk activity appears to be a version of “scutting” – the act of jumping on the backs of delivery vans and buses.

“Train surfing”, as it has become known, has become popular in the UK, where there have been six deaths in five years.

The activity appears to have started in South Africa, with reports of people performing stunts on top of moving trains – dancing around high voltage electricity supplies – dating back to the early 1980s. It has now spread to Brazil, Germany and Russia.

In some countries where it is possible to open the doors while moving, side surfing involves running alongside the train on the passenger platform as another person keeps the door open, or swinging out the door when the train passes through a tunnel and running on the walls.

Iarnród Éireann said it was horrified to see the videos turn up on social media, noting they had been put online and not brought immediately to the rail operator.

The pictures show the youths standing between carriages and calmly speaking to each other as they arrived at Killester station on Saturday.

A spokeswoman for Iarnród Éireann said station CCTV footage would be handed over to gardaí and the company hoped the boys would be identified.

The spokeswoman said drivers were trained to be vigilant, but there were not many rail staff on Dart trains and it would be very difficult for them to police the behaviour. But she said the Dart had security personnel and every effort would be made to prevent it.

The company said it would also appeal to young people not to engage in such behaviour and to their parents to try to prevent it.

“We have to try to apprehend these people we can’t have this kind of behaviour,” said the spokeswoman.

South Dublin county councillor Charlie O’Connor said a rise “in dangerous and antisocial behaviour” on buses in the Tallaght area could see the bus service to the area being reduced. He said already older buses which are more difficult for the youngsters to climb on to had been deployed in the area, rather than new, higher quality buses.

“It is terrible that commuters are unable to enjoy the new model of bus which has been rolled out over the past number of months,” he said.