The taoiseach has outlined the Government’s policy for the UK’s departure from the EU in a major speech on the Coalition’s Brexit policy. Video: Bryan O'Brien 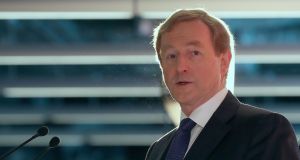 Taoiseach Enda Kenny. The Government will seek EU funding to help businesses affected by the UK’s departure from the union, the Taoiseach has said. File photograph: Niall Carson/PA Wire

The Government will seek EU funding to help businesses affected by the UK’s departure from the union, the Taoiseach said on Wednesday afternoon, in a major speech on the Coalition’s Brexit policy.

Speaking at an Institute of International and European Affairs event at the Mansion House in Dublin, the Taoiseach said that “stabilisation and adjustment measures” for the businesses most affected by Brexit will be funded by the Government.

He said support for these measures will be sought from Brussels.

In a wide-ranging speech, Mr Kenny said that Brexit poses “unprecedented political, economic and diplomatic challenges for Ireland” and warned that the negotiations on the UK’s exit will be “the most important negotiations in our history as an independent state.

“How we deal with it in the months and years ahead will define the future of our island for decades to come,” Mr Kenny said.

“Brexit is a British policy, not an Irish policy or an EU policy. I continue to believe it is bad for Britain, for Ireland and for Europe.

“But I respect the referendum result, and I recognise that Brexit is now going to happen. Unfortunately, its most severe impact could well be felt on this island,” he said.

In the speech, the Taoiseach toughened his rhetoric about the Government’s opposition to any form of a Border on the island after the UK leaves both the EU and the EU customs union.

“Let me be absolutely clear on one point. It is a matter of vital national interest for Ireland that we do not return to the days of a hard Border that we knew only too well. Or indeed, create a new one in the future,” Mr Kenny said.

“This is a political matter, not a legal or technical matter. It will have to be solved by political leadership.”

Mr Kenny said he has stressed these points “to every European leader I have met”.

The Taoiseach also warned that the collapse of the Northern institutions will hamper efforts to protect the interests of the North in the Brexit negotiations.

“With the dissolution of the Assembly, there is a very real danger that the absence of political leadership in Northern Ireland will lead to a retreat to partisan debate and an even greater marginalisation of Northern Ireland’s concerns,” he said.

“The Brexit process will not wait for another round of lengthy talks in Stormont. When article 50 is triggered, the world will move on, and it will move on quickly.

“Of course, I will do my best to put forward the interests of the North in the Brexit negotiations,” he said.

Mr Kenny said that, as part of its response to Brexit, the Government will embark on a campaign to grow export markets in eurozone countries.

“Based on that strategy, we will undertake the largest-ever programme of Ministerial trade missions in 2017,” he said.

The National Competitiveness Council will carry out research specifically to benchmark our competitiveness against the UK, as UK policies evolve for a post-Brexit environment, he said.

The Government will seek to tap European funding for the capital projects in the plan, he said.

“That plan will make prudent and effective use of our own resources, as well as resources available to Ireland as a member of the EU.

“We are already in active discussions with the European Investment Bank (EIB), which recently opened an office here in Dublin.

“I am confident those discussions will lead to significant further EIB investments in Ireland.”

He said the capital plan would include “detailed, funded plans to complete the national road network, including links between Dublin and Derry and Donegal, and to accelerate delivery of critical public transport infrastructure”.