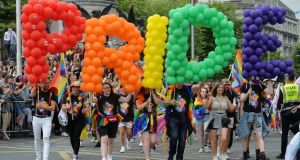 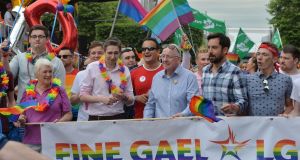 Taoiseach Leo Varadkar joined police officers from both sides of the Border at the Dublin Pride march on Saturday.

Thousands of people participated in the parade which kicked off on O’Connell Street and made its way across the city to Merrion Square.

“It’s a real honour to be here at Pride,” Mr Varadkar said.

“It’s only the third time I’ve been, my second time as Taoiseach and the first time joined here with the gardaí and the PSNI, also Defence Forces and the public service too.

“It’s really important that we say to anyone who is anybody who is thinking of joining our public service, whether it’s the civil service, the defence forces or the gardai that we’re an inclusive employer and if you’re gay or lesbian, or bisexual, transgender we understand that and you’ll be welcome.

“It’s also a really important message to young people to kids: you only live once — be the person you are.”

Garda Commissioner Drew Harris said it was very important that members of the gardaí were participating in the parade in uniform.

“We are here for a number of very good reasons - one to show that we’re a diverse organisation, we want to be an inclusive organisation and being here in uniform is a physical manifestation of that,” he said.

“Secondly we’re here to protect people from hate crime and we ask people who are subject to, or victims of, hate crime and hate incidents that they report those incidents. And lastly this is about us demonstrating to all of our staff that we’re an inclusive organisation and we want diversity within An Garda Síochána.”

Mr Harris said he could understand why some members of the LGBT+ community were not happy with the Garda’s involvement in the march.

“I can understand, they have a right to protest and that’s their entitlement, but we are here for the right reasons and we’re here with good intent and we want to illustrate that we in 2019 are here to protect all the people of Ireland, including the gay community,” he added.