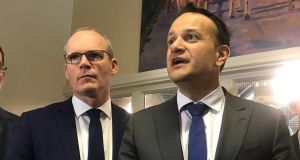 Taoiseach Leo Varadkar has again insisted that Fine Gael will not go into coalition with Sinn Féin after the general election.

He was speaking on Tuesday after the latest Irish Times/Ipsos MRBI poll showed support for Sinn Féin was just two percentage points behind that of Fine Gael.

Mr Varadkar said Sinn Féin’s suitability to govern should not be determined by its performance in opinion polls. He said he did not believe it was “a normal political party”.

“We are not ruling out Sinn Féin as a potential government partner because of where they stand in the polls. That is not what it is about at all. It is a principled position that we are taking,” he told reporters in Fermoy, Co Cork.

“It is our view Sinn Féin is not a normal party. Their decision making process involves consulting with an ard chomhairle and we have seen that in Northern Ireland where key decisions are not necessarily made by elected politicians.”

He added: “Secondly, and at a time of serious concerns about crime, Sinn Féin is a party that has consistently opposed the Special Criminal Court, a court that we use to lock up some really bad guys, dissident Republicans and people who are involved in organised crime.”

Sinn Féin recently said it would support a review of the non-jury court if it was in government as opposed to it being abolished outright, but Mr Varadkar said this was “not a U-turn”.

Mr Varadkar said the Irish Times/Ipsos MRBI poll showed there was volatility among the electorate. He said a weekend opinion poll showed “a big swing “ towards Fianna Fáil and that the latest poll was favourable for Sinn Féin.

“We will have another poll in another couple of days’ time and we don’t know what that is going to say. But the situation as far as I can see it is that this election is close. Fine Gael is coming from behind,” he said, adding that “it is close and it is all to play for”.

The Irish Times/Ipsos MRBI poll showed Mr Varadkar’s approval rating has fallen to 35 per cent from 51 per cent in October. The Taoiseach rejected suggestions that he was unpopular and possibly damaging the Fine Gael brand.

“Not at all. What the polls show is that all the three main party leaders are neck and neck. I am slightly ahead of the other two,” said Mr Varadkar, noting that the poll put the rating of Fianna Fáil’s Micheál Martin at 33 per cent and Sinn Féin’s Mary Lou McDonald at 34 per cent. “It is all to play for. Fine Gael can emerge as the largest party after the election.”

Asked if he believed Ms McDonald should be allowed to participate in televised leaders’ debates given her party’s strong showing in the polls, Mr Varadkar said it was a matter for the broadcasters.

“I don’t have a difficulty debating Micheál Martin head to head. I think it is right that we do that because we are the two people vying for the taoiseach’s office. But equally I have no difficulty doing a debate involving the leaders of the three major parties.”

Mr Varadkar said Fine Gael, unlike Fianna Fáil, had a good history of forming coalition governments that worked. It was in coalition with Labour from 2011-2016 and the last Fine Gael-Independent minority administration was propped up by Fianna Fáil through the confidence and supply deal.

“If we are in the situation, and I believe it will be the situation after the election, that we are the largest party, then we will want to talk to other parties except Sinn Féin about forming a government,” he said.

Hitman to be sentenced for shooting drugs cartel target next month 17:36
Shoppers spent more on Christmas 2020 than in previous year 17:36
Covid-19: Passengers may be required to pay for stay in quarantine 16:58
Coursing may not resume during Level 5 Covid-19 restrictions, judge rules 16:49
Man to be tried over threats to family of murdered Cameron Blair 16:44