US president to come to Ireland in November, following Armistice Day commemoration 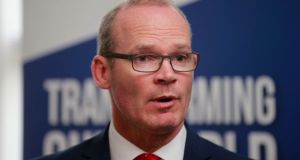 Tánaiste Simon Coveney: “It will be controversial because everything Donald Trump does these days is controversial.” Photograph: Nick Bradshaw/The Irish Times

Tánaiste Simon Coveney has said US president Donald Trump’s visit will cause controversy.

Mr Coveney said the Government was “a little taken by surprise” when Mr Trump made the announcement he was going to visit Ireland in November.

The US leader is expected to visit the country after he attends the Armistice Day commemoration in Paris.

Mr Coveney said: “It will be controversial because everything Donald Trump does these days is controversial.”

The Tánaiste added that just because the Government was facilitating the visit didn’t mean it endorsed US policies.

Mr Coveney also said he did not agree with former taoiseach Enda Kenny’s description of Mr Trump as a racist.

“I don’t say he’s a racist, but as I’ve said before I disagree with many of the policies that he advocates,” Mr Coveney said.

Speaking at the Fine Gael parliamentary party’s think-in event in Co Galway on Friday, the Tánaiste said the negotiations on the UK’s withdrawal from the EU had intensified in recent weeks.

He said: “When Michel Barnier talks about the ticking clock, and a lot of work to do, and not much time to do it in, you know, it’s not a bluff. He means it.”

Mr Coveney said he was more confident about the negotiations than he was prior to the summer break.

“The engagement is now much more serious, much more business-like,” Mr Coveney said.

“Both sides I think are determined to deliver an outcome, because no agreement and a potential for a no-deal Brexit is an outcome where everybody loses — in particular the UK and Ireland, but the EU as well.

“Nobody wants that outcome.”

He added: “With some more flexibility on all sides I think a deal can be done, hopefully ... by the end of October.” – PA