Surfers pounce as Prowlers roars back to life

Kurt Rist surfed a massive wave, estimated to be 55 feet high, at a spot called 'Prowlers' off the coast of Sligo on Monday. Video: Mikey Corker 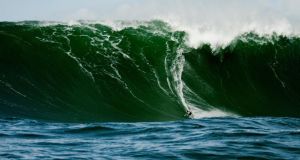 New Yorker Kurt Rist catches a wave at Prowlers, off the coast of Co Sligo, on Monday. Photograph: Aaron Pierce

New York surfer Kurt Rist could feel the adrenalin pumping through his veins as he rode the 55 foot wave - the biggest of his life - that is captured on the front page of The Irish Times this morning.

After more than three years of waiting, he was one of six surfers who took to the Sligo coast on Monday to surf the spot, which was dubbed Prowlers by the surfers who pioneered it in 2010.

One of the most secret surfing spots in the world, it is located about 2km from Mullaghmore, another world-class big wave break. The exact location of Prowlers is a closely-guarded secret that those in the know are loathe to reveal to outsiders.

“We’d like the top notch surfers around the world to surf with us in Ireland but we don’t want to be overrun,” said Dylan Stott, who joined Rist at Prowlers on Monday. “We’ve been waiting years for it to happen and conditions are really rare. It’s our secret so I can’t say exactly where it is.”

Rist (28), who has been a surfer for over 20 years, says big wave surfing is almost like a form of meditation.

“Your mind is completely empty, you’re completely focused on the present and everything else in your life disappears,” he said . “That’s what’s really cool about big wave surfing, because of the danger involved the focus is next to nothing. When you do catch the wave, it’s exciting, thrilling, scary and so gratifying.”

Rist first came to Ireland in 2009 to surf at Mullaghmore. Originally from Southampton, New York, the surf instructor spends six months of the year in Ireland riding the west coast swell. He has surfed all over the word, including Hawaii, Peru and Indonesia, but always chooses to come back to Irish shores for the winter.

Since the first sighting of waves breaking at Prowlers in 2006, local surfers have been studying the coastline, charts, wind conditions, swells and tides in an attempt to pinpoint the moment the towering waves will break at the spot again.

“There are 100 variables that make it all come together, that’s why it’s so rare,” said Stott.

Prowlers shot to fame in November 2010 when it was caught on camera for the first time. Photographer Aaron Pierce who took the shot on Monday, watched the surfers from a five-metre boat about 30 metres from the wave.

When waves get to a certain size, they are travelling too fast for surfers to catch them using arm-power alone so they get towed in by jetski.

“You have to be really careful because big rips can pull the boat towards the wave,” said Pierce, who is from New Zealand. “We’re always in contact with the coast guard and keep a radio with us at all times.”