Superhero Fionn gets thousands of birthday cards and medal from Gardaí 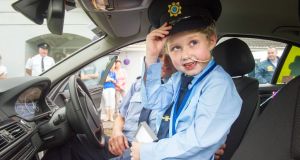 Fionn Doyle (7) pictured in a Garda car in Kildorrery, north Cork. His mother Eimear put out an appeal for people to send him a card for his birthday - and thousands of people from all over the world responded. Photograph: Daragh Mc Sweeney/Provision

A little boy who is battling leukaemia received thousands of birthday cards from all over the world on Wednesday morning after his mother posted about his birthday on Facebook.

A convoy of Garda cars also called to Fionn Doyle’s home in Kildorrery, North Cork along with a fire engine to help celebrate his seventh birthday.

Fionn was diagnosed with leukaemia at the age of 18 months and after three and a half years of gruelling treatment went into remission in July 2016, only to suffer a relapse in December 2016.

A bone marrow transplant last December failed to stem the cancer and Eimear Doyle and her husband, Jack and Fionn’s sister, Saoirse( 8) and stepsister, Amy (13) were told in May to brace themselves for the worst when he ended up on a ventilator in Temple Street Children’s Hospital. But Fionn rallied and came back home to Kildorrery.

On Wednesday, his bravery was recognised when gardaí from Fermoy presented him with his own garda uniform and medal for being a Super Hero while thousands of well wishers sent him birthday cards from all over the world.

“Today was a day we weren’t sure that we would ever see - when Fionn came home from hospital in May after spending days on a ventilator, we were told days to weeks at most, nothing more, but today was magical - memories made that will last forever,” Ms Doyle said.

She explained she had posted a message on Facebook, asking people to send Fionn a birthday card, but she never expected the response that they got. The local post-man delivered up to 10,000 cards, including from America, Australia and South Africa.

“He knew he was getting birthday cards but they’ve been arriving at a rate of 2,000 a day for the last few days- we’ve only opened 1,500 so far and they are from all over Cork and Ireland and all over the world so we told him it was because the world heard that he was a Super Hero.

“He knew the post was coming but to see his face light up when he saw the Garda cars from Fermoy and the Mitchelstown Fire Engine driving up to the house this morning, it was brilliant.”

“Cancer has always been in his life since he was 18 months so he has no concept of life without it, but today just gave him a massive lift- it was just magical and we are so grateful to everyone who made it such a special day for him and for us and gave us memories we will cherish forever.”