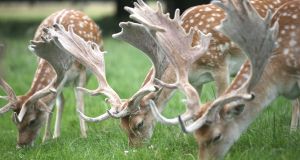 The sunny south east is expected to live up to its name this weekend by getting the best of the Bank Holiday period weather.

With high traffic volumes on all of the roads out of Dublin on Friday and Saturday morning, sunseekers heading south east are set to fare best, according to Met Éireann’s forecast

Some of the warmest temperatures are spread across the south midlands, including Kilkenny and Carlow, while the sunniest beaches are likely to be from Brittas Bay in Co Wicklow, southwards along the Wexford coast including Curracloe, Tramore, Co Waterford, and on the Cork Coast from Ballycotton to Inchydoney.

The further west one goes the greater the likelihood of cloudier conditions and Saturday, with rain showers, some of them thundery, forecast from Kerry up through the west coast of Clare, across Connemara and up as far as Donegal.

Sunday is set to be a similar day, starting mainly dry, with sunny spells. Scattered showers in the west and north west of the country will become widespread through the afternoon occasionally turning heavy. Afternoon temperatures of 15 to 18 degrees in light to moderate, occasionally fresh westerly winds are forecast. Rain is due to move into the east coast in late afternoon.

Monday will see some sunny spells everywhere with some sunshine over the northern half of the country and in west Kerry. A few light showers are possible in the north and west. Highest temperatures of 15 to 18 degrees are expected with mostly moderate westerly winds.

People travelling on public transport over the Bank Holiday weekend have been asked to remember the health advice is still to only travel for essential purposes.

Those planning to use public transport should remember it is mandatory to wear face masks and capacity on trains and buses is still restricted. Bus Éireann in particular has warned that peak travel time in now “sometime mid-afternoon”.