TY students are going green on the Aran Islands as part of an initiative by the Ryan institute, NUIG. 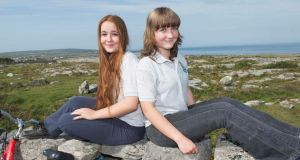 Inis Mór twins Macha and Surnaí Ó Maoldhia during an eco-tour of the island on Thursday. Photograph: Andrew Downes.

Twins Macha and Surnaí Ó Maoldhia know all about the cost of boiling a kettle, for when they plug it in they see how the “cents shoot up” on their household monitoring unit. Energy saving has been second nature to them since their Aran Island home was bookended in glass to harness the power of the sun.

“So we get the heat from one conservatory in the morning, and the other in the evening,” they explain.

“Our mum and dad built the house with lots of visiting ‘Woofers’ who helped out, and then we got in solar PV (photovoltaic) panels and an air-to-water heat pump that supplies all the hot water for showers.”

The sisters, transition year students at Gairmscoil Éinne on Inis Mór, found themselves explaining stuff they might take for granted as they escorted their teacher Ailbhe Ní Fhionnáin and classmates around their garden at Mainistir on Thursday.

Their home was the first of several stops on a new “eco-tour”, piloted on the larger Aran island as part of an EU- supported initiative to promote renewable energy technology.

Eco-tourism wasn’t a specific priority when the Aran Islands Energy Co-operative was established in 2012 with support from the Sustainable Energy Authority of Ireland (SEAI). However, education and training was a part of the co-op’s remit to work towards energy independence by 2022.

“We began by insulating Inis Mór’s old people’s home, and then we undertook a major project on Áras Éanna, the arts centre on Inis Oírr,” the co-op’s public relations officer Rónan Fitzpatrick says.

“Now we are retrofitting homes to ensure they are insulated, and by the end of the year we will have 20 per cent of housing stock done,” he says.

“And then in doing this, we realised that we could develop something by showing other people how it is done,” he says.

Hence, the “eco-tours”, for which the co-op drew up a pilot itinerary, in partnership with NUI Galway’s Ryan Institute, the Galway-Mayo Institute of Technology and the EU’s Remote (Renewable Energy Training and Demonstration Network for Remote Communities across the northern periphery programme) project.

Investors, renewable energy developers, researchers, policymakers and students from primary to third level are among the target groups for the day-long visits, says Leanne Szklarzewicz of EU Remote.

Pedal power is the main mode of transport for this particular tour, as provided by Michael Mullen who is already a convert to the cause. Mullen runs one of the island bike hire companies, and powers up the electric bikes among his fleet with kilowatts generated by PV panels at his premises in Cill Rónain.

The converted solar power also covers most of his main electricity needs, he explains – before fixing the class up with two dozen bikes and helmets.

After a briefing by Murray Porritt of the EU Remote partnership and a visit to the Ó Maoldhia household, the main stop is the island’s recycling plant. Manager Gerry Mullin apologises for the distinct aroma.

“That’s your food waste,” he tells the students, as he explains the system of handling four separate bin collections on the island each week.

Glass is crushed on site, and used in concrete for footpaths and walls, while paper is shredded and added to food, which is liquidised and heated to make compost for the island’s soil.

Plastic is compacted and shipped out, as is landfill and large electrical items. Freight is expensive, however, so “anything we can keep on the island is saving money”, Mullin says.

At a human fuel break in PJ Watty’s, energy co-op chairman Dara Molloy explains the long-term plan to use wind for an autogeneration unit.

“We’re hoping to draw enough low-cost energy from wind to power industries which will match the island’s strengths,” he says. Production of Aran sea salt, Aran beer and Aran whiskey are among the potential industries identified.

“Meanwhile, we do want people to draw inspiration from what we are doing,” he says. “So we would be delighted to hear from transition year teachers, and leaders of other interested groups, everywhere.”